These Are The 10 Best Firefights In Movie History

There’s plenty of gunplay in movies, but among all the Old West showdowns and hapless henchmen getting gunned down by … Continued 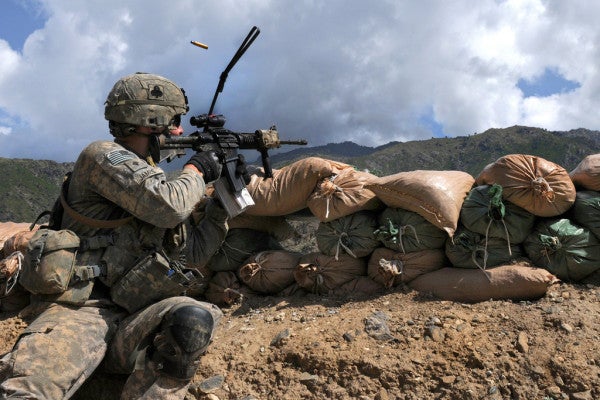 There’s plenty of gunplay in movies, but among all the Old West showdowns and hapless henchmen getting gunned down by action heroes are some real firefights: battles between two or more groups of armed individuals. Here are 10 of the most frenetic gun battles ever filmed. Of course, opinions may differ, so sound off in the comments if you have a favorite that didn’t make the list.

10. The opening firefight with blanks in “Tropic Thunder”

Is it a firefight if one side is shooting blank rounds? In this hilarious scene from the action-comedy “Tropic Thunder,” Tug Speedman (Ben Stiller) demonstrates how ridiculous some movement and weapons tactics many actors use in more serious films are.

This short, brutal engagement between a SEAL team and rogue Recon Marines from the seminal 1990s Michael Bay film, “The Rock,” is dramatic demonstration of the value of holding the high ground.

7. The lobby scene in the “The Matrix”

“The Matrix” was a pivotal film when it came to special effects, and that includes Neo (Keanu Reeves) and Trinity’s (Carrie-Anne Moss) physics-bending gunfight against a virtual SWAT team.

6. The final shootout in “The Wild Bunch”

The controversial 1969 Sam Peckinpah western “The Wild Bunch” ends in a hopeless up-close slugfest with the Mexican army.

5. The hospital shootout in “Hard Boiled”

What happens when you stuff the plot of “Die Hard” into the climax of a John Woo film? This awesome, long-take gunfight between Hong Kong cops and Triad gangsters.

4. Shugart and Gordon’s last stand in “Black Hawk Down”

As far as cinematic firefights go, the final battle in the town of Ramelle in “Saving Private Ryan” has it all: tanks, snipers, heavy weapons, close air support, and hand-to-hand combat. You’d be hard pressed to find a more complex and ambitious gun battle.

2. The club shootout in “Collateral”

In his 2004 thriller “Collateral,” director Michael Mann shows off his knack for realistic firearms handling with this four-way shootout between cartel gunmen, bodyguards for a nightclub owner, FBI agents, and special operator-turned-assassin Vincent (Tom Cruise). Cruise trained for months with a former British Special Air Service trooper in order to perfect the handgun techniques he uses here.

Classic heist film “Heat” solidified Michael Mann’s career as a director, and the bank robbery gunfight is partly why. Featuring audio recorded on location and excellent fire and movement techniques, the scene is considered so accurate that the shot where Chris Shiherlis (Val Kilmer) reloads his Colt M733 was allegedly shown to Army Special Forces trainees.