Nowadays, individuals accused of falsely claiming to have served in the military or received military decorations are easily and swiftly … Continued 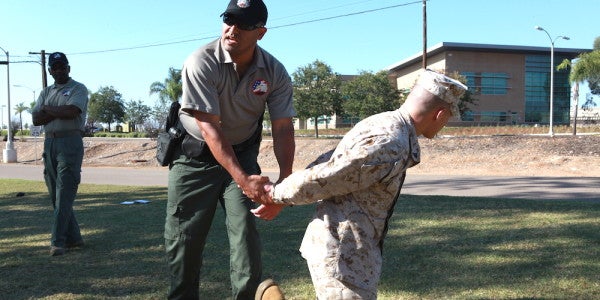 Nowadays, individuals accused of falsely claiming to have served in the military or received military decorations are easily and swiftly humiliated in videos popping up all over the internet. They are ridiculed and chastised for committing acts of so-called “stolen valor” — taking credit for serving in the military, or receiving a medal, that they never earned.

Typically, this humiliation occurs outside of the justice system, since the Stolen Valor Act of 2005 criminalizing stolen valor claims was declared unconstitutional in 2012. However, a new Stolen Valor Act signed into law in 2013 subjects an individual to a fine and/or imprisonment if they demonstrated an intent to receive tangible benefits, such as money or property, from their false claims.

Below are five rare cases where men accused of stolen valor-related crimes faced more creative, and sometimes humiliating, consequences within the legal system.

1. The fake Medal of Honor recipient who was required to write 174 apology letters.

For the better part of a decade, Jackie Stern proudly wore his Medal of Honor in public speeches, parades, and while bragging to anyone in his Florida community about his heroic action as a Korean War Army captain, CNN reported. Stern bought the real medal at a New Jersey military memorabilia show in 1986 for $500, according to the Miami Herald.

A sheriff’s detective checked Stern’s record and found he had served in the Army in the 1950s but never stepped foot in Korea, saw combat, or advanced beyond the rank of private. Stern also pretended to be a Purple Heart recipient, former prisoner of war, ex-police detective and, of all things one can lie about, a karate champion.

For wearing the Medal of Honor without authorization and altering his military discharge records in order to drive his car with a special Purple Heart license plate, Stern was sentenced to write a slew of apology letters. First, the judge ordered him to publish a public letter of apology in a quarter-page newspaper advertisement featured in the Sun-Sentinel newspaper on Memorial Day in 1997. Additionally, as that same newspaper reported, Stern was required to write personal apology letters to all 174 living Medal of Honor recipients. Lastly, Stern was ordered to volunteer at a Veterans Administration hospital for 250 hours and submit himself to mental health treatment.

“I know that my actions have cheapened the honor of those who have received this valiant award and my pitiful attempt and selfish quest for family recognition has tarnished the dignity of all the brave men and women whom this medal was legitimately bestowed,” Stern wrote in the public apology letter published on Memorial Day, according to the Chicago Tribune.

2. The police officer forced to trade in his uniform for scrubs.

Eric Piotrowski served as a Marine from 1986 to 1991 and later as a police officer with the California Exposition & State Fair Police Department. But he forever tarnished that record of public service by pretending to be a decorated war hero, according to an account by Marine Corps Times.

He created a fraudulent Silver Star citation for a made-up action during the first Gulf War, stating that he exposed himself to cover an American anti-tank team and guided comrades through enemy defenses near Kuwait International Airport.

Although Piotrowski never served in Kuwait during that war, the unsuspecting California Department of Veterans Affairs honored him for his supposed bravery in 2007. California VA Undersecretary Roger Brautigan, a retired two-star Army general, personally presented the Silver Star award in Piotrowski’s home.

In a 2008 telephone interview, Piotrowski declined requests from the Marine Corps Times for more detail on the grounds that he couldn’t recall the specifics of his actions which earned him the award. The FBI followed with its own investigation.

The 41-year-old Piotrowski was convicted in 2009 of violating the Stolen Valor Act. A police officer at the time of his arrest, Piotrowski was ordered to turn in his peace officer’s certification and banned from ever serving in law enforcement again. He was sentenced to 12 months probation and 200 hours of community service at a veterans hospital, a punishment attorney Michelle Rodriguez called “poetic justice.”

3. A man who claimed to be a Marine was ordered to march in public with a sign for 50 hours.

After escaping from prison and being recaptured with a firearm in his possession, 36-year-old William Horvath sought leniency by claiming he had served in the Marines from 1986 to 1991 as a field artillery spotter/scout, receiving a Purple Heart in the invasion of Panama.

Horvath provided false photographs, dog tags, and decorations to his probation officer. His father even corroborated Horvath’s claim. “I am going to go out on a limb in this case, Mr. Horvath, and what I’m going to do is put you on probation,” said Chief U.S. District Judge Donald Molloy in that case.

But four years later, Molloy learned of Horvath’s lie after Marine Corps officials noticed his uniform was worn improperly in the photos and didn’t fit with the era, his decorations were displayed incorrectly, and other equipment didn’t belong, reported the Whitefish Pilot.

Molloy, an F-4 Phantom fighter pilot during the Vietnam War, ordered Horvath to write a public letter of apology and separate letters to the commandant of the U.S. Marine Corps, and the local Veterans of Foreign Wars and American Legion chapters. Molloy also ordered Horvath to march in front of the U.S. courthouse in Missoula, Montana, wearing a sandwich board announcing his crime for 50 hours.

The front of the sign was to bear the words, “I am a liar. I am not a Marine.” On the back: “I have never served my country. I have dishonored veterans of all wars.”

The unique punishment meant no prison time, just probation, home confinement, and a $1,500 fine. In December 2006, the Whitefish Pilot ran Horvath’s public letter of apology. “I realize that by falsely representing myself as a Marine, I have dishonored all those who have served in the United States Marine Corps and all other branches of the U.S. military, and that my false statements have diminished and tarnished the contributions and sacrifices that others have made to protect my freedom,” Horvath wrote in that letter.

An appeals court later overturned the conviction and sentence, ruling that Horvath was actually exempt from criminal liability for lying to the probation officer. Regardless, the original punishment appears to be one of the most creative stolen valor sentences ever handed down by a judge.

4. The Fake Navy SEAL who received a fake gift, courtesy of the police.

Twenty-nine-year-old Carlos Felipe Luna-Gonzalez attracted attention last year after allegedly posting photos of himself at a coffee shop wearing a Navy dress uniform showing a lieutenant junior grade rank and adorned with a Navy SEAL trident, jump wings, and other awards, reported Navy Times. He dug a deeper hole for himself after allegedly telling law enforcement officials in Texas that he was stationed at a nearby base while awaiting a medical discharge for combat injuries he sustained on a SEAL operation in Africa.

In reality, Gonzalez had formerly held the rank of seaman apprentice before the Navy gave him an early general discharge. He had never been a commissioned officer or Navy SEAL and had never seen combat. Discovering this, law enforcement personnel decided they would mislead Gonzalez in turn by presenting him with a fake award.

Texas Ranger Anthony Bradford, an Army veteran with a son in the Navy, concocted a sting operation with local law enforcement to nab Gonzalez in the act. They had the owner of Lone Star Guns, a veteran and active supporter of the veteran community, invite Gonzalez to a meeting and present him with a “firearm of appreciation” worth $2,300. Gonzalez arrived in the dress uniform with officer’s insignia, SEAL Trident, and Purple Heart. After accepting the award and telling the store’s owner about how he was shot, he was arrested and charged with theft, tampering with a government document, and presenting a fraudulent military record.

He was released from jail after posting an $18,500 bond, but then allegedly fled to Puerto Rico, where authorities are currently seeking to have him extradited, reported WFAA. “He couldn’t even shine the SEALs’ boots, as far as I’m concerned,” Parker County Sheriff Larry Fowler, also a veteran, told WFAA.

5. The wannabe counterterrorism expert sentenced to 500 hours at a veterans cemetery.

For 12 years, William Hillar tricked public safety and national security organizations into paying him $171,415 to provide teaching and training in counterterrorism, drug trafficking, and human trafficking operations, according to an FBI press release. Hillar falsely claimed he was a Ph.D. graduate from the University of Oregon and that the blockbuster Hollywood movie “Taken” was based on his life after his daughter was kidnapped, sold into sex slavery, and murdered.

On resumes, in statements, and on the internet, Hillar presented the following biographical summary about his supposed military service: “William G. Hillar is a retired Colonel of the U.S. Army Special Forces. He has served in Asia, the Middle East, and Central and South America, where his diverse training and experiences included tactical counter-terrorism, explosive ordnance, emergency medicine and psychological warfare.”

In reality, Hillar’s entire military service was with the U.S. Coast Guard Reserve as an enlisted sailor from 1962 to 1970, achieving the rate of radarman and rank of petty officer third class.

In 2011, a U.S. district judge ordered 66-year-old Hillar to pay back every cent he had scammed from the public and private-sector organizations and sentenced him to 21 months in prison and three years of supervised release. For good measure, the judge also ordered Hillar to perform 500 hours of community service at Maryland state veterans cemeteries.