One of the common complaints about Hollywood is that everything is either a reboot, remake, or sequel. Some of them... 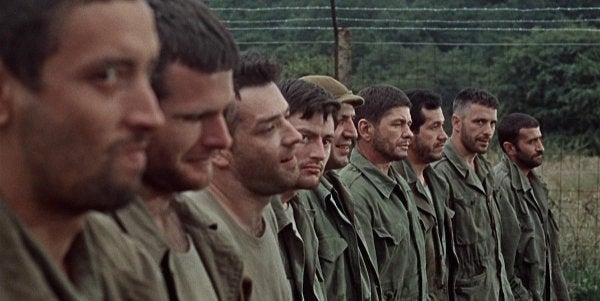 One of the common complaints about Hollywood is that everything is either a reboot, remake, or sequel. Some of them are horrible, some are entertaining. “In a world” (to use a movie trailer voice) where Spider-Man can be rebooted three times in less than 20 years, with multiple sequels within the reboots — it’s a damn shame that some great war and military movies can’t get the 21st-century treatment. These aren’t necessarily the greatest war films of all time, but by virtue of relevance or the fact that they would look vastly better today, somebody needs to remake or reboot them. Here are the first ones that need to be done.

Released in 1983, WarGames was visionary given the state of computer technology at the time. A nerdy high-school computer hobbyist played by Matthew Broderick starts by hacking into his school’s mainframe to change his grades. Before long, while trying to preview a game company’s latest releases, he inadvertently breaches NORAD’s computer system. By playing an online game called “Global Thermonuclear War,” he nearly starts an actual nuclear war when NORAD believes the simulation is a real attack on the United States.

WarGames portrayed what was once a fringe subculture of gamers and hackers; viewers today would laugh at the eight-inch floppy discs and screeching 300-baud modems, but WarGames was cutting edge at the time. The pervasiveness of current computer technology is exactly why WarGames needs to be rebooted in the present day. If 1983’s NORAD fell for a few imaginary radar blips, what could a powerful modern AI engine do to raise international tensions in our wired society? Create Facebook and Twitter bots to enrage the populace, who then demand war from their politicians? The possibilities are endless.

The Dirty Dozen featured a cavalcade of the biggest names in Hollywood from the 1960s. Back then, all-star casts were the way movies got noticed in a crowded box office field. The Dirty Dozen definitely came to play with guys like Charles Bronson, Telly Savalas, Ernest Borgnine, Donald Sutherland, and even football star Jim Brown, all led by the tough but irreverent Lee Marvin. The movie blends gritty action with dark humor in a way that still reads as modern half a century later.

In the story, Marvin’s character, Maj. John Reisman, recruited military death-row convicts for a suicide mission deep in Nazi-occupied France in exchange for commutations. Marvin has to corral his band of miscreants while fighting both the Germans and Big Army, as they try to thwart his outside-the-box methods.

It’s a funny movie, but also one of the great examples of the ‘60s action-movie genre. War movies before it was released in 1967 tended towards blind jingoism. Those afterwards tended toward anti-war activism. The Dirty Dozen hits the sweet spot of action and sarcasm.

Unlike during World War II, the military doesn’t have a prison full of death-row inmates sitting around these days, but I’m sure a good scriptwriter could find a way to provide a modern-day crop of troublemakers for Reisman to recruit. Of course, the new suicide mission would be against a gathering of key ISIS leaders or perhaps Kim Jong Un’s inner circle, not Nazis at a cocktail party. Dark, but funny.

This 1980 Australian film is definitely the most obscure movie on the list, but also perhaps the best. Edward Woodward (of the original Equalizer TV series) plays Lt. “Breaker” Morant, accompanied by a bunch of great Aussie actors you’ve definitely never heard of. Based on a true story, three Australian officers are on trial for executing enemy prisoners during the brutal Boer War in South Africa. During the course of the trial, we see the ethical dilemmas that led up to the trial, both on the parts of the defendants and British commanders.

The British Army wants to sweep the brutal tactics used in the Boer War under the rug. The officers on trial faced the same ethical challenges fighting a counterinsurgency at the turn of the 19th century as leaders today, and when they go outside regulations, they have to decide whether to save their own lives at trial by lying or face the consequences of their actions.

In the movie, Breaker says “Rule 303,” referring to the iconic Lee-Enfield .303 rifle, is the source of his authority to kill the prisoners. He had the means, so he did it. “Rule 303” appears in every counterinsurgency sooner or later.

Movies depicting modern conflict usually fail in depicting these moral quandaries, either by being overly melodramatic or by avoiding them altogether. Keeping a remake in its original era would allow it to explore the moral dilemmas it shares with today’s wars. But, it allows enough distance to remain objective and keep it from becoming political.

It’s absolutely worthy of a 21st-century upgrade. Thankfully, Edward Woodward is no longer the world’s most famous Australian actor.

If you don’t understand Doctor Strangelove, you don’t understand nuclear deterrence. The movie is insane because the world in 1964 when the film was released was insane too. The Cuban Missile Crisis had occurred just two years earlier. Most Americans still feared that war with the Soviets could happen at any time. On top of that, “How can we make that nuclear?” seemed to be the prevailing attitude of weapons designers.

A rogue Air Force wing commander with a penchant for conspiracy theories launches his unit’s aircraft in the hopes of sparking a decisive war against the Soviet Union. When it’s discovered the USSR has an automated doomsday device built to destroy the world if America attacks, it turns into a theater of the absurd, as the United States tries to get its own rogue bombers shot down in order to save the world. The movie is a perfect blend of humor and existential despair.

Doctor Strangelove would work well as a remake still set in the 1960s, or, given today’s geopolitical climate, revamped for the 21st century. Just as in 1964, America is in a state of unease about nuclear threats. Instead of a standoff against the Soviet Union, now we face many challenges, from near-peers like Russia and China to emerging threats like Iran and North Korea. Who doesn’t believe that Kim Jong Un would love to build a “Colbalt-Thorium G” doomsday device?

As an added benefit, the B-52 bomber would work whether the remake is set in 1964 or today.

This is a classic old-school war movie. That said, even John Wayne can be improved upon. This 1962 film featured an ensemble cast of the best actors of the time, cutting between key parts of the invasion of Normandy on D-Day. The Longest Day was Dunkirk, except the good guys win.

It needs to be done again for a new generation before the last of the Greatest Generation leave us. Regardless of the cast, the biggest difference will be modern 21st-century effects making this story pop on the IMAX big screen. That’s enough reason for Hollywood to start remaking more of these movies.

The 4077th Mobile Army Surgical Hospital was the basis for both the genre-changing movie and the sitcom that redefined television. It’s well-known that M.A.S.H. was set in the Korean War, but was really about the Vietnam War. Both the movie and the series pulled no punches when it came to depicting the horror and futility of war, while still finding humor in it all.

A M.A.S.H. reboot could take the best of both mediums while following an Army field hospital in the dark days of Operation Iraqi Freedom before the surge. A mockumentary treatment of such a unit — like The Office or even This is Spinal Tap — set in a combat zone would make for an epic look at the war in Iraq through an iconic franchise that first raised questions about the cruelty and futility of war more than a generation before.

My only demand is that Jack Johnson have a guest spot singing the theme song,”Suicide is Painless.” Of course, by the time Hollywood is finished, Nickelback will be playing it at a USO show during the movie’s finale.