7 Quotes From Anchorman That Explain Warfare 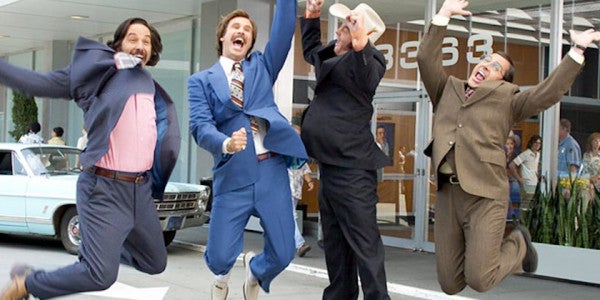 Movies sometimes provide deep philosophical insights into the American psyche. The 2004 Will Ferrell hit “Anchorman” became an instant classic whose one-liners are still quoted more than a decade on, and probably will still be for decades to come. These quotes not only serve as great date-night conversation topics, but can also help to explain war. Modern day warfare is complex; however, Ron Burgundy and the San Diego News Team can help expand our insight into the nature of the American way of war and those who fight it.

1. Boy, that escalated quickly … I mean, that really got out of hand fast.

Warfare has a tendency to spin out of control. Here, Ron Burgundy and his news team discover that similar to war, violence between news teams can escalate rapidly. In international affairs, the decision to use military force should not only be the last resort, but also be the right resort. No matter who the enemy or adversary is, they tend to respond when other nations or entities use military power to resolve conflict. Escalation can occur slowly over the course of a decade plus similar to Vietnam, or can occur rapidly, as seen in America’s response to the 9/11 attacks and subsequent invasion of Afghanistan.

2. I will smash your face into a car windshield, and then take your mother, Dorothy Mantooth, out for a nice seafood dinner and never call her again.

Here, Champ Kind communicates an understanding that defeating an adversary requires multiple options from violence to friendly persuasion. Over the past years, the United States Military moved from a system of developing 3-distinct courses of action to developing a “Range of Options” for senior level decision makers. Options can range from military assistance and Special Forces raids, to unconventional warfare to large-scale conventional force combat and move all the way to nuclear options. No matter what option nations take to deter or persuade their adversaries, Dorothy Mantooth will remain a saint.

Brian Fantana did his best to impress women with a repugnant cologne that smelled like Indian Food wrapped in a dirty diaper. However, his understanding that nothing will work 100% of the time is profound and truly Clausewitzian. The elements of fog, friction, and chance tend to ensure that no plan or strategy is guaranteed to work. There are very few absolutes in warfare, and the strategic thinker should always be skeptical of grand claims that promise quick results.

4. Dammit. Who typed a question mark on the Teleprompter?

At this point of the Movie, Ed Harkin expresses his anger when Ron makes a statement in the form of a question, due to a question mark mistakenly typed on the teleprompter. His error represents a rigid form of execution, where individuals do not have the authority to adapt their operations to the situation. In warfare, enemies and adversaries continue to adjust their methods to the operational environment. Adaptability is a key tenet of warfare, and leaders must be able to adjust their operations to the current situation.

Related: 10 Ways ‘Seinfeld’ Can Help You Explain The Military To Civilians »

5. There was a time, a time before cable. When the local anchorman reigned supreme. When people believed everything they heard on TV.

In the 1970s, television was the chief form of mass media. Those who read the news, from Walter Cronkite to Ron Burgundy were trusted sources to the American public. Sadly, this is no longer the case. Not only are television news anchors no longer trusted sources in war reporting, major news networks tend to report news from war zones that align with the worldview of their audience. Moreover, the rise of social media, blogs and other forms of information has led to confirmation bias on nearly any significant action that occurs in geopolitics and warfare. Further complicating the information environment is the rise of “fake news” and “click bait” throughout Facebook and Twitter feeds. In this complex world of competing information outlets, senior leaders would be wise to understand the reliability of their information sources before making strategic level decisions.

6. I immediately regret this decision.

The beginning of wisdom in human and military affairs is recognizing a mistake and knowing when to stop. Similar to statesmen such as Metternich, Castlereagh, and Bismark, Ron understood when he had gone too far and immediately expressed his regret upon jumping into the Bear Pit at the San Diego Zoo. In combat, at the tactical level we often recognize bad decisions as soon as they are made. This may be a decision to engage a speeding vehicle at a checkpoint, or to drop a 2000-pound precision guided munition, only to discover the wrong person or building was killed or destroyed. At the strategic level, poor decisions can take longer to recognize. For example, invading the wrong country to establish a democracy at the point of a gun is a decision that some still do not recognize as a mistake.

7. It is anchorman, not anchorlady. And that is a scientific fact.

Champ Kind and the news crew of “Anchorman,” in a comedic way tackled the rampant sexism of the late 1970s. Indeed, when Veronica Corningstone joined the news team, ratings went up, much to the surprise of Ron Burgundy and his crew. Similar to the news industry, the United States military now recognizes the value of maximizing human capital. Up until 1970, there had never been a female flag officer. Elizabeth Hoisington and Anna Mae Hays broke that barrier. Up until 2015, there was never a female Ranger School graduate; Lt. Kristen Griest and Capt. Shaye Haver broke that ceiling. In 2016, Griest became the Army’s first female infantry officer. Further, until 2008 there had never been a female 4-star general until Gen. Ann Dunwoody pinned on her fourth star. Finally, until 2016 there was never a female Geographic Combatant Commander until Gen. Lori Robinson assumed command of USNORTHCOM.

Perhaps 2016 was not so bad after all. You stay classy, America.