In “Jarhead,” Sam Mendes’ 2005 film about the Operations Desert Shield and Desert Storm, “war is boring as hell” is... 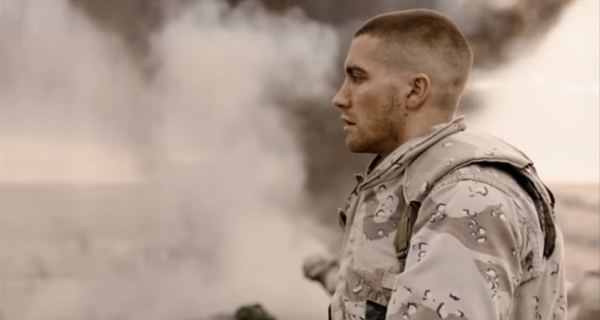 In “Jarhead,” Sam Mendes’ 2005 film about the Operations Desert Shield and Desert Storm, “war is boring as hell” is perhaps more apt than the oft-touted saying, “war is hell.” One of the few war flicks that focuses more on the wait for action than combat itself, the film is based on the memoir by Anthony Swofford a Gulf War veteran and former Marine scout sniper.

The film follows Swofford, played by Jake Gyllenhaal, as he sets out on a coming of age odyssey that takes him from boot camp, to the Fleet Marine Force, or “the suck,” and finally to Iraq, where he participates in Desert Shield and later, Desert Storm.

While underrated compared to recent films about the wars in Iraq and Afghanistan, “Jarhead” succeeds at capturing aspects of Marine culture that few movies do.

Here are seven Easter Eggs and obscure facts for those who remember and miss “the suck.”

1. Initially the director, Sam Mendes, thought Jake Gyllenhaal was too “soft, puppyish and doe-eyed and sensitive and floppy-haired,” to play Swofford, a tough young Marine sniper. But, Mendes changed his mind after the young actor broke protocol and called the director directly, swearing he’d do anything for the role.

2. While waiting for orders to deploy, Swofford's platoon is watching the iconic helicopter attack scene from “Apocalypse Now,” where American attack helicopters descend upon a Vietnamese village as Wagner’s “Ride of the Valkyries” plays.

3. The word “fuck” in all its forms appears nearly 300 times in the movie script. Yes, we counted.

4. When Gyllenhaal’s character suffers a violent, though short-lived, mental breakdown, he threatens to kill one of his squadmates. Failing to do that, he tries to get the other man to kill him instead. Gyllenhaal played the exchange so intensely that he knocked out one of his front teeth when he jammed the rifle barrel into his mouth. According to SFGate, Gyllenhaal insisted on finishing the scene, all while holding the bloody tooth in his hand.

5. When Swofford is stuck on latrine duty, the words “Abandon all hope, ye who enter here” are scrawled on the shit bucket. This is a well-known line from “Inferno” by the poet Dante Alighieri. In the poem, the words appeared scrawled upon the gates of hell.

6. To help give the film its candid and gritty feel, cinematographer Roger Deakins shot the movie using handheld cameras.

7. The Marine platoon featured in the movie functions as a focal point for a host of military rumors and tropes, ranging from extreme hazing rituals where the Marines brand one another with “USMC” to horrible breakups, like the story about a Marine who received a sex tape of his wife sleeping with his neighbor. God damnit, Jodi.

CORRECTION: A previous version of this story incorrectly referred to Walter Murch as Marcus Murch. (4/11/2016; 7:56 pm)