From the opening credits — heavy on mustaches and music that sounds eerily similar to the soundtrack for an arcade... 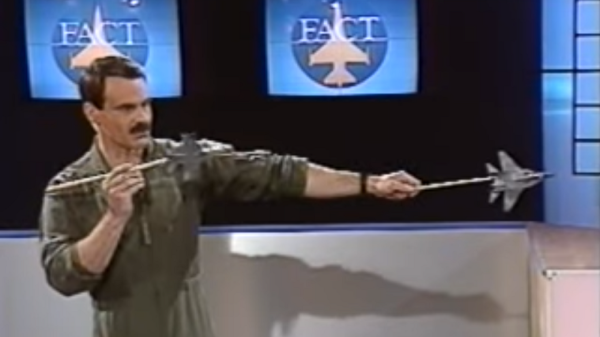 Created by the software firm, Spectrum Holobyte, the 1993 video was designed for the company’s FALCON 3.0 air combat simulator, which is focused on the F-16, notes The War Zone’s Tyler Rogoway, who mined a treasure trove of campy mil videos on YouTube to unearth this retro gem.

While easy to lampoon, the video is informative and includes a perfectly cast instructor named Pete “Boomer” Bonanni — no, really — who guides his students (four of whom sport fabulous upper-lip flavor-savers) through the finer points of air-to-air combat. Using cutting-edge technology, we learn the difference between a one- and two-circle fight, expertly demonstrated with the clever use of, well, circles.

Perhaps best of all is when Bonanni illustrates his points with elaborate hand gestures and aircraft models on sticks — a standard instructional practice, until hestarts to swagger across the stage and the lesson sort of becomes an impromptu light show — sans glowsticks.

Say what you will about the instruction’s campiness, but America’s security sometimes depends on a man would be just as comfortable at a rave as on a flightline.