A True Story Of Rage Quitting In Afghanistan

Rage quitting, for the non-gamers, is when a gamer gets so frustrated or upset with the way a video game … Continued 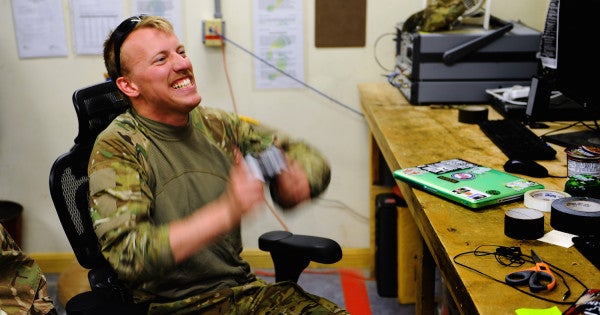 Rage quitting, for the non-gamers, is when a gamer gets so frustrated or upset with the way a video game is playing out, that he or she abruptly quits in a manner that suggests a total loss of control. It’s an odd thing to experience and a fascinating thing to witness. While you could technically rage quit anything, it’s typically a term reserved for gaming, and it’s something I’ve recently been thinking about in the context of the military.

Video games have featured prominently through every deployment I’ve been on. My first deployment had me begging my parents to send a Game Boy Advance for months until it finally arrived. The two best weeks of that deployment were spent lazily playing Halo tournaments in a bombed-out hotel at Baghdad International Airport. On my second deployment, I’d spend evenings in the morale, welfare, and recreation building playing in Madden tournaments to take my mind off the drudgery of a punishing schedule.

During my last deployment this past year, my platoon enjoyed a lot of down time. Operation Enduring Freedom became Operation Resolute Support, and with that, things slowed down significantly. Thanks to a very generous support package from Operation Supply Drop, that down time was spent gaming. We turned a shipping container into a giant gaming room, complete with a large flat screen television and a dirty brown couch.

One of the noncommissioned officers in the platoon was a huge soccer fan and completely obsessed with Manchester City and the Premier League. He brought an old copy of FIFA 2013 with him on the deployment and urged us all to play. Most of us, myself included, weren’t really into soccer and not interested.

Over time, his enthusiasm won a few of us over and we started to play.

Without understanding the rules of soccer or any idea of formations or strategy, the first few months were spent wildly mashing buttons and gathering red cards. The only decent player in the platoon other than the NCO who brought the game was our Argentinian medic. He played soccer growing up and was familiar with the video games as well. He was good.

Undeterred, we continued playing and losing. This culminated about halfway through the deployment with a “mandatory fun” World Cup tournament where everyone in the platoon chose a team and competed. It lasted a couple of days, and with little surprise, the final game was between the NCO and the medic. The medic won.

By this time, though, we were all hooked. And we started to get better.

We learned the key players and the key positions. We learned about how and when to make substitutions and how to set up a nasty cross. Some of us spent time watching YouTube tutorials during our down time on how to properly defend or execute a scoring attack.

The competition started getting serious.

We’d rib each other for just choosing good teams with speedy players. Sending the ball down the field in hopes of outrunning the defense was met with groans. Score with too many headers and they became “bullshit headers.”

The platoon settled into a routine. Each night, after dinner, the platoon leadership would put out notes, and then it was game time. We’d huddle into the game container for the nightly “tournament.” Throughout the day we’d hype it up. “This is it, man,” someone would say. “I’ve got it down now, I’ve got your defense figured out, you’re fuckin’ done.”

Soldiers pulled guard duty. They did work details. They went on mission.

And then we’d play the game.

The rules were simple: Winner stayed on, playing until defeated or until he beat everyone. Win the majority of the games in a day and he was declared “Champ of the Day,” which lasted only until the next day when the title was once again up for grabs. Members of the platoon who didn’t play would come in just to watch and cheer and jeer to accentuate the pain of losing and the thrill of winning.

For months this went on.

With each game and each day, the stakes got higher. Tension built. And emotions flared.

That’s when the rage quitting began.

“This is such fucking bullshit!” someone would say before throwing the controller against the wall, getting up and storming out.

Another time, right after an opponent scored, one rage quitter simply leaned over and shut the Xbox off before gently putting the controller down and walking out. Silent, like nothing had transpired. Challenged about it later, he’d say the game never technically finished, so it wasn’t really a loss.

Getting your opponent to rage quit became the ultimate victory. Winning was no longer good enough. To get a rage quit meant that you not only defeated him in the game, but psychologically as well. The rage quitter's frustration reached such a level that they couldn’t control themselves. No one entered a game intending to rage quit — everyone wanted victory. But circumstances wouldn’t allow it, and instead of seeing the battle to the end, they’d just get up and leave, sparing themselves the final embarrassment.

We continued playing the game until the day we left, holding one last tournament at Bagram Airfield to settle things once and for all.

Shortly thereafter, we boarded planes, and came home. Most of the soldiers in the platoon moved on to new jobs, new duty stations, or left the Army altogether.

Time and space provides opportunities to think and reflect, and it was a slow deployment, so a lot of the high drama came in the form of non-combat situations — like interpersonal relationships and rage quitting.

Getting a person to rage quit was fun, and everyone got a kick out of it at the time. But for the people experiencing it, they more or less lost control of themselves and reacted viscerally and with emotion, storming out. Catching up with the same person in the chow hall later, they’d avert their eyes from others, especially the person who beat them. They’d say that their mood was completely killed and they’d often swear off gaming for awhile or be itching for a rematch as soon as possible to try and settle the score.

What it leads me to think is this: Under less stressful conditions back in America, would the same soldiers rage quit? Being deployed is stressful, no matter the year or location. You’re away and not in control of much of anything.

It’s hard to overstate how important gaming is to today’s generation of soldiers. Where gaming was once just a nerdy and niche hobby, today’s troops grew up playing games and the ones who don’t are the exception. While deployed, gaming provides an easy and welcome reprieve from the deployment. It also allows soldiers to “uncork” in a safe way. Rage quitting has always been a part of gaming, and soldiers rage quitting in Afghanistan shouldn’t come as any surprise.

Still, looking back on it, it’s hard to know for sure. At the time, it seemed like we were just a bunch of young men playing video games. Rage quitting was just part of the fun. Time and distance has me wondering if there wasn’t more going on underneath it all.