After months of hype and speculation, EA Games just dropped the new Battlefield V trailer. And yes, we’re going back... 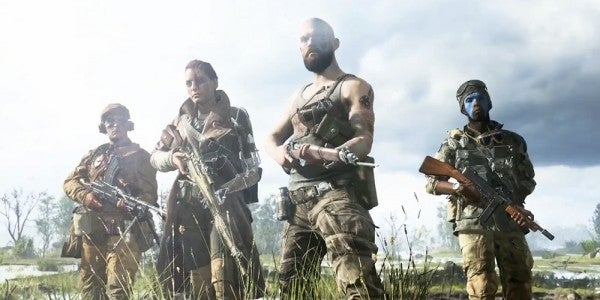 Here’s what’s in store when Battlefield V releases for PS4, Xbox One and PC in October:

Set in World War II, with a plan to run the whole gamut of the conflict, the initial launch of Battlefield V will take place in Europe as Nazi Germany goes on the offensive. While the game is likely to feature many historically accurate weapons, vehicles and pieces of gear, it’s still a video game, and there’s a good chance the developers exercised a fair amount of creative license.

Okay, sure they probably took some creative license, but who hasn't dreamed of a Mad Max/World War II mash-up?EA Games

Like previous Battlefield games, the newest will add DLCs periodically, but one of the biggest changes is that EA Games will do away with Premium Passes — so that means that once you buy the original game, that’s it, no more additional purchases to get all the new content.

Consider buying BFV like signing enlistment papers in 1942: You’re in it ‘till you win it.

The game will have all the typical Battlefield fare: Massive maps, multiplayer, single-player campaigns, vehicles, aircraft, and classes. So far the class breakdown is unchanged, with the tried and tested medic, scout, assault, and support archetypes still in play. There’s also room to customize your avatar and their equipment and uniform:

Don't lie, the uniforms are half the reason we joined anyway.EA Games

Battlefield V will bring with it a new four-player co-op mode, and the massive 64-player Operations mode from Battlefield 1 will return. Called “Grand Operations” this time, they involve multiple missions over several “days” where the outcome of a battle will determine how the next match will unfold, and what assets will be available at the start — you know, like it often is in an actual war.

There also appear to be some significant changes to gameplay mechanics, like the ability to drop in the prone while moving backward. Stationary weapons can now be towed by vehicles, and all players — not just medics — can revive fallen teammates.

Based on today’s livestream reveal, which involved a Q&A; session between Daily Show host Trevor Noah and the game’s developers, Battlefield V is taking its destructible environments a step further.

Now you can reinforce, and in some cases, reconstruct parts of the battlefield you blew up earlier in the match with a new toolkit, which replaces Battlefield 1’s gas mask. Players will be able to reinforce fortifications, set up firing positions and machine gun nests — which has the potential to dramatically change how people play, since they can more actively manipulate terrain, instead of just blowing it all to hell.

It’s still too early to tell if the game will deliver on what Battlefield often does so well — big matches, beautiful graphics, excellent gameplay, and flexible playstyles — or get too carried away with new features. If you want a cautionary tale on what the latter looks like, ask Call of Duty how their jetpacks and wallrunning went over with players. Here’s hoping we don’t get that with Battlefield V.