At the height of World War III, the U.S. government develops a top-secret new weapon it hopes will lead to … Continued 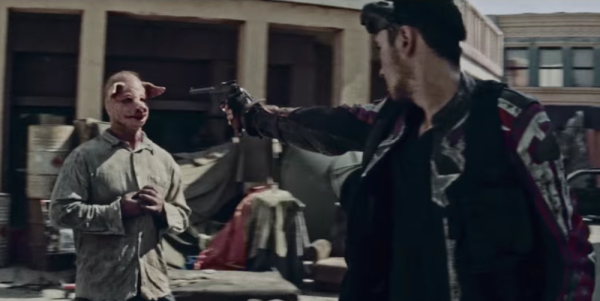 At the height of World War III, the U.S. government develops a top-secret new weapon it hopes will lead to an easy victory.

How did this ever get through appropriations?

Naturally, things don’t go as planned: Although the new Frankenstein manimal proves highly effective in battle, the species demonstrates a conspicuous lack of respect for the chain of command. Before long, the pigs, which become known as Muzzles, conquer their would-be overlords and rise to “the top of the food chain.” Their favorite meal? It’s not an MRE, let’s put it that way.

Now it’s up to a rag-tag militia to destroy them.

That’s the premise of “Bullets of Justice,” a new series being produced in Kazakhstan that aims to do for “the other white meat” what the incomparable “Range 15” did for zombies. Speaking of “Range 15,” both films are lavishly decorated in gore and include a cameo from Danny Trejo. Neither one would qualify as wholesome family viewing, unless you’re family is named Manson.

On the production’s Indiegogo page, the filmmakers say they have already shot the entire series and are merely seeking funds for post-production. An accompanying behind-the-scenes video shows how the film was made.

On Feb. 1, the producers had raised less than $1,500 of their $100,000 goal. Hopefully they’ll get there before the real human-pig hybrids — the ones supposedly being developed merely for organ transplants and other peaceful purposes — reach full maturity.