Buzz Aldrin is many things: engineer, Air Force veteran, second man on the moon and, as of June 30, comic... 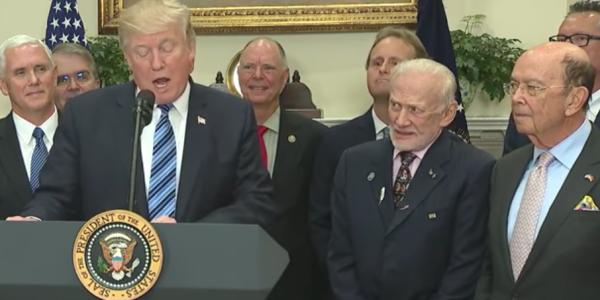 Buzz Aldrin is many things: engineer, Air Force veteran, second man on the moon and, as of June 30, comic relief during what an otherwise awkward White House briefing.

Aldrin was one of the many guests surrounding President Donald Trump as the commander-in-chief delivered some puzzling remarks before signing an executive order to reinstate the National Space Council, and the former astronaut’s reactions steal the show.

“At some point in the future, we're going to look back and say how did we do it without space?” Trump said. Aldrin’s eyes grew large.

After going on for a while about dreams and stars, Trump shifts from the podium to sit behind a desk to actually sign the order. Pen in hand, the president looked up at Aldrin and joked, “There's a lot of room out there, right?”

Aldrin laughed and delivered an appropriately pitch response: , “to infinity and beyond,’ the maxim of Buzz Lightyear from the beloved classic Toy Story. It’s a fairly well-known phrase, but the reference went right over Trump’s head, sparking a moment of existential angst.

Sure. Totally makes sense. Just like the House Armed Services subcommittee’s decision to approve legislation to create a “Space Corps” within the Air Force, even though the branch neither wants it nor thinks it’s a good idea in general.

According to the Washington Examiner, Air Force Secretary Heather Wilson opposed the addition of the Space Corps, told lawmakers on June 21 that it would make the service “more complex, add more boxes to the organization chart and cost more money.” You know it’s a bad idea when the head of a service turns down more money, but we bet Wilson would be all for the Space Corps if it was headed by Aldrin — and that’s totally fine by us.