After spending the weekend, and part of this week, binge-playing “Call of Duty: Infinite Warfare,” I think one of the... 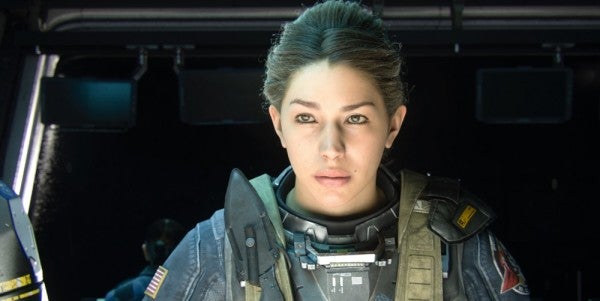 After spending the weekend, and part of this week, binge-playing “Call of Duty: Infinite Warfare,” I think one of the highlights of this month was talking to Jamie Gray Hyder, who plays Lt. Nora Salter in the newest installment of the game. The other highlight was finally killing the game’s nemesis: Adm. Salen Kotch, played by Kit Harington of “Game of Thrones” fame. Mars aeternum, my ass, get back on the wall, Jon Snow.

While Hyder is well-known for her role as Danielle on HBO’s “True Blood” and Lucia Solano on USA’s “Graceland,” the 31-year-old actress steals the show in Infinite Warfare, which is an impressive feat considering it's a first-person shooter, not a movie. In the game, Hyder assumes the role of Salter, a whiskey-voiced member of the elite Special Combat Air Recon, aka SCAR. Think of her as a cross between a Navy SEAL and a fighter ace. Salty and strong-willed, her character serves as a partner to the player in the campaign.

Set in the distant future “Infinite Warfare” marks a major departure from past Call of Duty games, which have grown increasingly futuristic. This one however, takes place almost entirely in space or on other planets. In the game, an interstellar war has erupted between earth’s United Nations Space Alliance and Mars’ Settlement Defense Front. The player assumes the role of Capt. Nick Reyes, a team leader with SCAR. As a newly minted captain following a devastating attack, you lead the crew of a space age carrier with Lt. Salter as your second-in-command, wingman, and confidant.

Following the game’s Nov. 4 launch, professional gamers gathered in Chicago, Illinois for the third annual Race to Prestige competition. Viewers and players donated to the Call of Duty Endowment, which raises money to help place veterans in high-quality jobs and careers — last year’s event raised more than $200,000 in donations. While at the event, Hyder spoke with Task & Purpose about her work on the game, what it’s like to step into the boots and space helmet of a futuristic operator, and what she thinks of the portrayal of veterans and the military in video games and popular culture.

Tell me about your character in “Call of Duty: Infinite Warfare,” and are you a fan of the franchise?

I play Lt. Nora Salter, she’s kind of a badass fighter pilot. A mix between a topgun fighter pilot and a Navy SEAL, up in space. She serves as a partner for the player-character and they lead the good guys against the bad guys in “Call of Duty: Infinite Warfare.” I was familiar with the franchise, but I’ve never been the best first-person shooter player. I watched a lot of people play it, but I did play through the last three titles of “Call of Duty” while I was working on this game in order to understand what people like about it, and how to get better at it, and how to see how what we’re doing impacts gameplay.

Playing a military service member in the game, what to you is most important to get across in terms of behavior, demeanor, and quality of character?

There’s definitely a ton of nuances with the actual tactical side of it. You’re talking about body language and assessing threats and all of the more technical stuff, but on a more human level, it was really important to us, and it was imparted on us by our advisors how important the group is, how important the squad is. You’re nothing without the people around you. While shooting, we formed an amazing bond and while training together. … It really drives home the fact that you need the people next to you — man, woman, whatever race they are, or sexual orientation, doesn’t matter — if you’re all willing to be there and are willing to risk your lives, that bond is so strong. We’re not doing that in making the video game, but we still want that bond to come across to the players.

Can you tell me a bit about the things you were trained up on while preparing for this role?

Yeah, we all met in a hangar down in Santa Monica, California, and worked for a couple days and learned how to clear rooms and how to take doors, and learned the differences between concealment and cover. We learned how to properly use our weapons, how to take them apart, put them together, and change mags. We learned how to assess the threat level in a situation that we’re approaching in order to properly adjust our body language or our weapon, depending on the threat assessed in the next room we’re entering.

We worked with former military during the game. You have former Navy SEALs and naval officers who were there with us every day to make sure everything we were doing was tactically sound, and the terminology was being used correctly.

I’ve been through a lot of stunt and weapons training, but when it’s coming from a member of our military who’s giving you the why, as well as the how, it makes a really big difference. It’s different than saying here’s how you do this, because now they’re providing the example of, Here’s an event that took place that I witnessed when this wasn’t done correctly, and this was the severe consequence.

So, when someone’s saying you’ve got to pin your heels to the ground when you’re laying down trying to take a sniper shot, it’s because you don’t want to get your heels blown off. It’s different than someone telling you to make sure you’re flat. If someone is explaining to you that their buddy got the top of their heels blown off because they weren’t pinned to the ground, you kind of start to think about it in a totally different context.

We definitely learned what kind of adjustments would be necessary dealing with the elements in space. When you’re clearing a ship hub, it’s very much the same as clearing a building anywhere. You know where your sight lines are, and going back to concealment and cover, you know where you’re secure and where you’re not. We needed to keep all of this in mind as we’re portraying each scene in the game. Space just added a few more challenges.

We actually spoke with NASA and spoke with our military advisors and said, “What would warfare in space look like? What would be necessary?” We talked about the basics of battle and not only warfare, but Call of Duty, which is all about flanking your enemies and getting to cover, but in zero Gs, you can’t run around so you’ll need some help, so we added the grappling hook to pull yourself to cover, or pull your enemies to you so you can take them out.

Sometimes people feel a little conflicted about using war and combat for entertainment, but I think there’s a way to do it that does justice to service members and veterans. How do you do that? How do you achieve that?

I think it’s super important for the franchise to get the military aspects right, because we know so many of our military members play the game. To be able to interact with our former and current service members and get their reactions to the game — it’s not the sensationalism of war, I think it’s an enlightening experience, which is why getting it correct is so important.

Then, at the same time, everybody needs to lighten things up. It is a form of entertainment, and we’ve been interested in this type of entertainment since we were created as a species. You can go back to the gladiator fights and the arena fighting. That has always been something that has been almost a carnal desire in humans. While we have people who are out there fighting for our country, we want to provide a window into what that’s like. While it’s obviously very different in real life, I think that if you guys can enjoy playing the game as service members, then I think it must be serving as an enlightening experience for those who are not serving — to get an idea of what it might be like.