I had my doubts, but this looks pretty damn good. 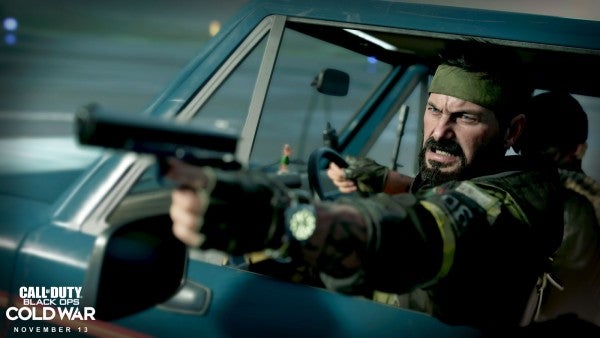 I don't know about the rest of you, but I only just got used to the idea that Call of Duty: Modern Warfare was going to be the shooter I'd be playing for the foreseeable future.

However, it looks like I'll have to split my time between Modern Warfare and the series' upcoming addition: Black Ops Cold War, which based on the reveal trailer looks fucking awesome.

The official trailer, which was released Wednesday during a special in-game event, indicates that Black Ops Cold War picks up in the 1980s following the events of the first Black Ops game.

According to The Verge, it will feature a “flashy, Hollywood-style single-player campaign,” and a return of some beloved, and not-so-beloved, characters, from Frank Woods to Alex Mason and Jason Hudson.

Additionally, it looks like Call of Duty's popular battle royal mode, Warzone, will carry over to Black Ops, as will in-game progression toward things like blueprints and skins. And, to top it all off, Zombies will be coming back.

Now, when the news first started going around that Activision was launching a new version of yet another beloved game in the series, I was a bit worried. While Call of Duty: Modern Warfare has been an unquestionable success, the franchise has a checkered history when it comes to reboots, sequels, and reimagining old content — anyone remember Call of Duty: WWII?

Related: ‘Call of Duty: WWII’: The good, the bad, and the overdone

Speaking personally, the first Black Ops game is one of my favorite first-person shooters of all time, and not because of the online gameplay, where plenty of other shooters that beat it out of the park. No, Black Ops held its own because of the story. It had, at its heart, an incredibly dark, brooding, violent and engrossing plot — one in which the main character is a CIA operative who gets brainwashed by the Soviets and turned into a sleeper agent, without his (or your) knowledge. It was like a first-person Tom Clancy novel — except that, at the end, the protagonist doesn't foil the plot to destroy America and instead pushes the big red button himself.

Based on the reveal trailer for Black Ops Cold War — which appears to span both sides of the Berlin Wall and stretch from the jungles of Vietnam and Cambodia to Middle Eastern deserts — we might get some of the same depth in character development and plot as we had in the original.

Fortunately, the same folks behind that — Activision's Treyarch and Raven Software — are also the ones crafting the newest addition to the series, which is set to launch Nov. 13, with next-gen consoles slated to get their version sometime during the 2020 holiday season.