'Captain Marvel' may be the story of a space-faring super hero, but it's also the Air Force's greatest recruitment ad in years. 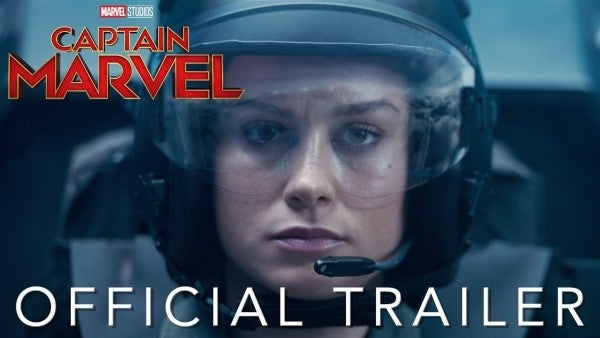 Captain Marvel is energy-blasting and face-punching its way onto screens March 8, with Brie Larson starring as Carol Danvers, in Marvel Comics' latest addition to its cinematic universe. The full-length blockbuster is exactly what we've come to expect from Marvel origin stories: It's big, ballsy, has a balance of humor and action, gratuitous but fun cameos, and a solid cast of supporting characters.

In Danvers' case, that supporting cast includes a few stars, like Samuel L. Jackson as a young Nick Fury, with two eyes and a job as an agent rather than the head of S.H.I.E.L.D., oh, and the United States Air Force. The service's involvement has been touted for months, and there's a good reason for it: In Captain Marvel, the Air Force has one of the best recruitment pitches it's had in years, and they seem to know it.

Without flat-out endorsing the movie, the service is hoping that the film may usher some prospective recruits to their doors, and they even set up an Air Force STEM display at the Air and Space Museum ahead of a March 7 early screening for military families and personnel.

“All of us have been inspired by moments in history or films we've seen in our lives that inspired us to do something, or stand up, and I'm really hoping this touches young people about who they can become,” Air Force Secretary Heather Wilson said of Captain Marvel during a press event ahead of the screening put on by the Air Force, which Task & Purpose attended.

No, joining the Air Force will not get you cosmic super powers, though maybe you'll be able to fly, assuming your recruiter didn't lie and tell you “sure, enlisted can be pilots.”

Blockbuster films bolstering recruitment isn't a new story. Hell, it's not even a new story in movies about military aviators. Following the release of Top Gun in 1986, Navy recruiters noticed an increase in naval aviation interest among prospective recruits, the Los Angeles Times reported in July of that year.

But the Air Force doesn't seem too keen to present itself, or its pilots, the way Top Gun framed Navy pilots, its top official told Task & Purpose.

“I have to say that one of the things about Top Gun for me, is that it's very different from Nellis for us and people often mistake them,” Wilson said.

“The [Air Force's] Fighter Weapon School motto at Nellis is humble, approachable, credible, and that's very different than the image in Top Gun, because we want our graduates to be humble, credible, and approachable teachers back in their squadron, and I think you see that among the past graduates from the school,” Wilson added. “There is a professionalism and approach-ability that permeates the leadership in the Air Force.”

Directed by Anna Boden and Ryan Fleck, Captain Marvel takes place several decades before the events of Avengers: Infinity War, and jumps back and forth between Carol Danvers' time in the Air Force where she serves as a test-pilot, to six years in the future, when she has superhuman powers and fights for a different military force — the Kree, a race of technologically advanced blue-blooded aliens.

When the film begins Danvers is training on the Kree homeworld, Hala, under the watchful orange-hued eyes of Yon-Rogg, played by Jude Law. Danvers is part of an elite intergalactic military unit, kinda like space SOF, and they're preparing for a deadly battle against a menace called the Skrull; nasty aliens (and intergalactic terrorists, the Kree assure us) who can alter their appearance, down to their DNA.

Danvers has no recollection of her past, how she came to join the Kree, or got her powers, which she masters over the course of the movie, before unleashing her full potential and becoming a one-woman army in her own right. After a mishap on a mission, she ends up stranded on Earth, and the details come flooding back: Flashbacks to her childhood, her time in olive green cargo pants and white shirts, dive bars with 90s grunge music blaring, to hangar bays, flight suits, and aviator sunglasses.

In these moments, we get a sense of Danvers' time in the military, and while it's not revealed in one sweeping 20 or 30-minute arc, her service is still critical to her character, and getting it right was of particular importance for the Air Force, it turns out.

The service's involvement was substantial, and included everything from flights in the back of an F-16 to having airmen on hand to review scenes involving the service to ensure even the minor details were caught — down to which shirt Carol Danvers was wearing during cadet training.

It's a minor detail, sure, but those are sometimes the ones that cause vets in the audience to utter a small sigh as they think to themselves: come on, it's so simple, just get the goddamn uniforms right!

Larson and co-star Lashana Lynch, who play's Danvers' wingman and friend, Maria Rambeau, each spent time with female pilots to prepare for their roles.

“I had the opportunity to work with the crew, and with Brie Larson and I really appreciated the fact that they wanted to give an accurate portrayal of a female fighter pilot in the Air Force and I really appreciated that attention to detail and the time and effort they spent ensuring that,” Brig Gen. Jeannie Leavitt, the Air Force's first female fighter pilot told reporters.

And it'd be embarrassing if Captain Marvel had messed any of the little things up, or even some of the big ones, considering that 73 active duty airmen appeared on screen, and filming involved units from both Nellis and Luke Air Force bases. The service also provided their historians to make sure the uniforms were accurate to the time — it was the '90s, and we know that's ancient history. Doubt it? Partway into the first act, Carol Danvers crash lands into a Blockbuster when she arrives on earth, then walks over to a Radio Shack to pilfer it for comms equipment — presumably a bunch of beepers, a walkman, and a cellphone the size of a beer bottle — so she can contact her home base on Hala.

While Larson's background is as a fighter pilot, compared to her life as a galaxy-hopping super-powered living weapon, it may have taken a bit of a back seat in terms of flat-out screen time, though it still remained integral to her character.

The effect is that viewers see Danvers' sense of self isn't based solely on her ability to fly a fighter jet, or climb ropes during basic, or even in her super-strength, but in her willingness to continue getting back up, whether it's after getting knocked down by bullies, tossed from a go-kart as a child, falling from an obstacle course during training, or surviving a crash-landing in a souped up aircraft with fancy alien tech.

Danvers' military service is a facet of who she is, an important one, but not the totality, which is true for many former service members; their time in uniform is a defining part of their lives, but not the sum of who they are. By framing Danvers' service in that way, Captain Marvel tells a story that's (at least somewhat) recognizable to vets and troops alike — super powers, furry alien killing machines called flerken, and shapeshifting aliens notwithstanding.

SEE ALSO: 'Captain Marvel' Is The Recruiting Tool Of The Air Force's Dreams