‘Die Hard’ is the greatest Christmas movie of all time

The holiday season is a time for family, gift-giving, and most importantly forgiveness. Unless you're John McClane, then it means all that, plus a ton of mayhem and violence. 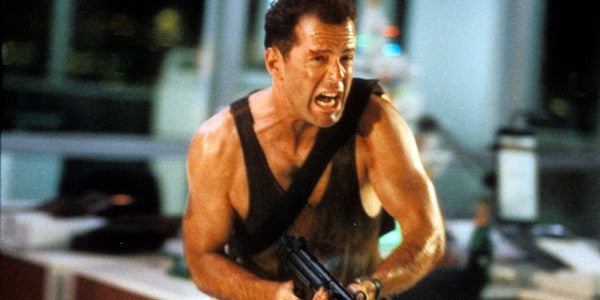 Editor's note: This article was originally published on Dec. 21, 2016.

The holiday season is a time for family, gift-giving, and most importantly forgiveness. Unless you're John McClane, then it means all that, plus a ton of mayhem and violence.

The 1988 holiday classic centers around John McClane, a New York City detective who's in Los Angeles to try to save his marriage when all hell breaks loose. A group of heavily armed villains break into McClane's wife's office building during their Christmas party and take the staff, including his wife hostage. Side note: her name is Holly, as in “deck the halls” and “fa-la-la-la-la” holly — subliminal messaging on the part of the movie's screenwriters, no doubt.

It's left to McClane, played by Bruce Willis, to save the day. Crawling around in air ducts and crashing through a number of windows, he takes out the bad guys one by one before dropping their leader Hans Gruber, played by an acerbic Alan Rickman, some 30 stories to his death.

It may not seem like a Christmas movie at first, but Die Hard hits all the marks, if you think about it, it's basically “Home Alone,” but with live ammo. McClane sneaks about, setting traps, like Kevin McCallister from “Home Alone.” He's even rescued by an unassuming ally, Sgt. Al Powell, the beat cop who comforts him over the radio and shoots one of the villains at the end, saving McClane. If this doesn't sound familiar, think about the old man with the shovel who rescues another holiday hero at the end of a different Christmas classic.

Yep, Die Hard has more in common with “Home Alone,” than it does with Lethal Weapon, another 1980's action movie set during the holidays. There's the line — Die Hard qualifies as a Christmas movie, Lethal Weapon does not.

For the naysayers who argue that two-hours of violent shootouts with terrorists isn't a solid basis for a Christmas movie, well, they're not actually terrorists. They're thieves who planned a massive heist of hundreds of millions of dollars in bearer bonds during a holiday season meant to celebrate charitable giving. It's like “How the Grinch Stole Christmas!” but with guns; and in this case, Santa's little helper drops the Grinch from the top of Nakatomi plaza, which in real life is the headquarters for 20th Century Fox. But the point is that the bad guy is a thief who not only steals on Christmas, but is so possessed by greed he'd commit murder. That's the ultimate Christmas villain.

Then, there's our protagonist, John McClane, a loveable but still rough-around the edges father flying across the country to meet his wife (they're separated) and two kids for the holidays. Hoping to patch things up, McClane comes bearing gifts, like a gigantic teddy bear for his kids, and a dead bad guy bedecked with a Santa's hat and a message for Hans Gruber.

Even the film's musical score is largely Christmas music, with “Ode to joy” playing intermittently throughout, and occasionally in a different key to make it sound more ominous.

Yes, it may be unconventional, bloody, and have more swear words in it than people are used to hearing in holiday movies, but don't be fooled Die Hard is without a doubt a Christmas movie, and since it's one of the few that has partial nudity and tons of dead bad guys, that also makes it the best.