‘Duke Nukem’ Is Getting A Live-Action Movie Starring John Cena

Every American man of a certain age is intimately familiar with Duke Nukem, the muscle-bound Army veteran who’s been crushing... 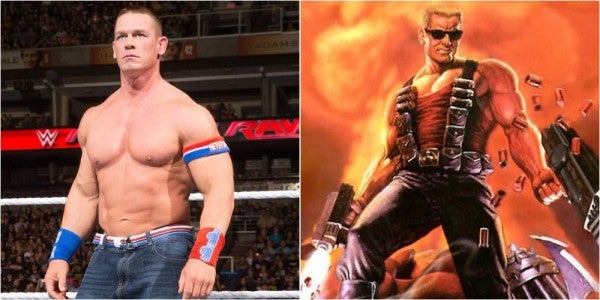 Every American man of a certain age is intimately familiar with Duke Nukem, the muscle-bound Army veteran who’s been crushing alien invaders and saving the planet since he first burst onto your MS-DOS screen back in 1991. But after decades of chewing bubblegum and kicking ass at the behest of the CIA, everyone’s favorite action hero is bringing the fight where it belongs: a movie theater near you.

Pro wrestler and brick shithouse John Cena is reportedly on board to play the titular Nukem in a live-action movie adaptation of the iconic video game series, which hopefully will be reminiscent of the breakout 2016 murderfest Deadpool, producers Andrew Form and Brad Fuller told CinemaBlend this week.

“[Cena] is confirmed at this point, but if he reads the script and he doesn't like the script, I'm sure there's ways that he could pull out, but right now he's our guy,” Form said, adding that the as-yet-unfinished script for the movie is “going to be about tone.”

“How do you nail that tone in the way that Deadpool nailed the tone?” he said. “I think we have to do that, and if we don't get the tone right then we're not going to make the movie.”

Related: John Cena Tells Us What Branch He Would Join If He Went Into The Military »

How do you nail that sweet, sweet Deadpool tone? Gratuitous violence and a hefty dose of uber-macho dick jokes — something easy for Nukem, a pastiche of every barrel-chested Terminator rip-off that ever went straight to video in the ‘80s and ‘90s.

And Cena, the goofiest musclehead-turned-actor since Dwayne “The Rock” Johnson became America’s woke sweetheart, may be the perfect mix of brawn and humor for the part. Beyond his freakish resemblance to Duke Nukem, Cena has a long relationship with the U.S. military, from going through Marine Corps boot camp as a personal challenge to diving deep into his character as an Army sniper in 2017’s The Wall.

Sure, it’s not the biggest advantage when you’re playing a caricature of a super-soldier fighting off an alien invasion, but Cena will certainly attempt to bring a level of authenticity to the role.

In the meantime, we’re just sitting here imagining Cena threatening to skull-fuck us with a size 13 boot.