Kevin Lacz is not a Navy SEAL. He completed his Navy enlistment about six years ago, which makes him a … Continued 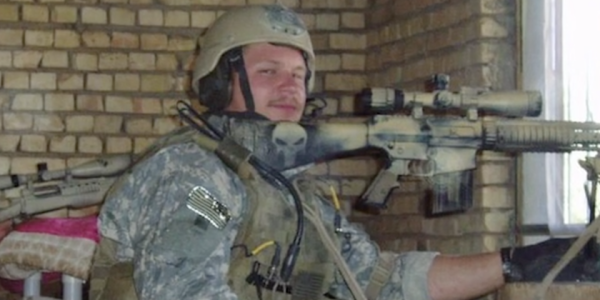 Kevin Lacz is not a Navy SEAL. He completed his Navy enlistment about six years ago, which makes him a former SEAL, but he still looks like he could swim a mile in full combat gear. That, I assume, has something to do with the reason he became an elite special operator in the first place: Lacz is extremely competitive. He’ll be the first to admit it. In fact, throughout his new memoir, “The Last Punisher,” which was co-authored by his wife, Lindsey, and writer Ethan Rocke, Lacz constantly reminds us that a love of competition is the one quality all Navy SEALs share. And it’s not just limited to training. In Lacz’s telling, a SEAL’s drive to be the best of the best is most apparent on the battlefield, where combat is sought after and kills are tallied like points in a dart game.

Lacz enlisted in the Navy in early 2002 after a failed semester in college and eventually found himself in SEAL Team Three, where he joined an already battle-hardened Chris Kyle in Charlie Platoon as a combat medic and sniper. In 2006, the platoon deployed to Ramadi, a festering hotbed of insurgent activity. That deployment, made famous in Kyle’s “American Sniper,” is the focus of “The Last Punisher.” But this time, we see it from Lacz’s point of view, which is the perspective of a 24-year-old “new guy” who is eager to earn his stripes during one of the bloodiest battle of the Iraq War. This is not a cautionary tale of a man broken by combat. It’s a remorseless account of a commando engaged in what Patton once described as “the most magnificent competition in which a human being can indulge.”

Lacz now works as a physician's assistant in Florida, where he lives with his wife and two children. The Battle of Ramadi was waged 10 years ago, and, of course, a lot has changed since then — most relevantly: the withdrawal of American combat troops from Iraq in 2011, the rise of ISIS, and Kyle’s cold-blooded murder at the hands of a sociopath who happened to have spent some time in the Marines. For Lacz, it’s all personal. When SEAL Team Three left Ramadi in the Fall of 2006, most of the city had been wrested from al Qaeda control, Kyle had solidified his reputation as the most lethal sniper in American history, and Lacz had earned his stripes and then some. But “The Last Punisher” isn’t an attempt at making sense of everything that happened in between. The book’s primary focus is combat. And to that extent, it’s an exhilarating read.

With “The Last Punisher” now on shelves, Task & Purpose spoke with Lacz about the Battle of Ramadi, Chris Kyle’s legacy, and why America owes it to itself and its allies to finish the fight in Iraq.

What do you say to people, especially those within the operator community, who say that books like this shouldn’t be written?

Everyone is entitled to their own opinion. We knew that going into this book. There are going to be people who support you regardless, because you’re their teammate. And then there are people who say you shouldn’t write it. Here’s the deal: Not a lot of people who served in World War II talked about their experiences, because everybody served. They didn’t have to come back and say, “This is what I went through,” because everybody was there next to them in the trenches. The same thing can be said for Korea and Vietnam. Now, less and less people go overseas. So when you watch the evening news you don’t have that personal connection. It’s just a bunch of crazies over there cutting heads off. I think where we go visceral in the book, and where we go raw and vivid, shows that these are the types of individuals on the front lines doing it. They’re not robots. They’re real human beings doing this job and this is what they really experience. To the other team guys who say you shouldn’t write a book, I say: America needs more alpha males and let’s go inspire some.

What do you say to the people who will inevitably find the portrayal of SEALs in this book brutal or morally dubious?

When it came to World War II, what allowed us win was total warfare. We had to commit acts of brutality, and the pinnacle of that was the two atomic bombs. We had to destroy cities of people to show the enemy that we are the superior force. After World War II, we evolved to a more civilized society where we accept less and less violence for protection while the rest of the world stayed the same — the brutality is just as vivid as it was back then. We don’t recognize how savage the world is, so when we describe it in “The Last Punisher,” it kind of shocks people, and they’re like, “Why do you talk about that sort of thing?” As professional soldiers, we are paid to do a job, and our job is to eliminate the enemy because they’re bad. And when you get the chance to exercise some long range target interdiction, you’re thrilled, because it’s business. I think a lot of people don’t understand that because they get caught up in that more emotional stuff, like this is a human life. The enemy fights for their side and we fight for our side, and eventually we’re going to meet on business terms, and let the better person win.

Are you concerned with the fate of Iraq?

As much so as any American who fought in the war and saw American ground won and then given back. I think anyone who’s served in the military and fought for something holds onto it pretty passionately, and to see it given away, especially for politics and rhetoric — look, we left Ramadi, we left Iraq winning. We had done a bunch of work, and there’s a ton of blood, sweat, and equity in those sands. To see the president and his foreign policy team leave it for political gain, it’s maddening. It really is. I think any American who’s been there can feel the same thing. We’re pissed because we left Ramadi, we left Fallujah, we left Iraq, and that’s been turned over to ISIS. It’s like what George Bush prophesied: If we don’t beat this enemy now, we’re going to fight one that’s ten times as worse. And that’s what we’re doing.

Do you think we owe it to America’s veterans to keep putting manpower and resources into this fight?

I think we owe it to the Iraqis, because we made a commitment to them and then we left. I think we owe to our allies in the region, who live with these terrorist groups in their backyard. I think we owe it to the American people because I feel the president is more comfortable protecting those who will lavish him with praises than those who he took an oath to protect. Our world is no safer than it was seven years ago. I’d say it’s left safe as more terrorist attacks happen in our country. We owe it to take the fight to the enemy because our country is less safe. We left allies in the dust and we left greater instability in the world.

What, for you, is Chris Kyle’s legacy?

I have a different view of Chris than most people. Chris will always be like a brother to me, and he’ll always be like a mentor to me. He helped mentor myself and a lot of young snipers and a lot of young SEALs in some of the most pivotal battles in the Iraq War for the SEAL Teams. He was not larger than life to me. He was always somebody I could have a casual conversation with, and vis versa. He was always somebody who would stick up for the young guys in the platoon and let their voices be heard. He’s a great role model for a lot of us. It’s just crazy to see his name in the past tense.

What do you make of the all the controversy around his medals?

Chris was like a brother to me, and like every other SEAL, he entrusted his life to us, and us to him. I saw him behind the gun. I’ve been on patrols with him. Not once did he give me a reason to question his actions or question his intent on anything. I served in two platoons with him. I saw one Silver Star and three Bronze Stars, so I can account for those. But he was also there for two platoons before I got to SEAL Team Three. I really think that where we’re at, with the political climate, and some of the transgressions that have gone on with some elected officials, there’s bigger fish to fry, and those people are actually alive to defend themselves. So I think we’re wasting our time.

Do you have any regrets from your time in the service?

No. I joined post-9/11. I wanted to go downrange. I wanted to shoot terrorists. I thought I’d find myself in Afghanistan, but I found myself in Iraq. But I did everything that I wanted to do. I fulfilled every desire I had before I joined.

If you were talking to a SEAL who was about to get out of the Navy, what advice would you have for him?