Days after releasing an emotionally charged new trailer for The Long Road Home, National Geographic is unveiling another look at … Continued 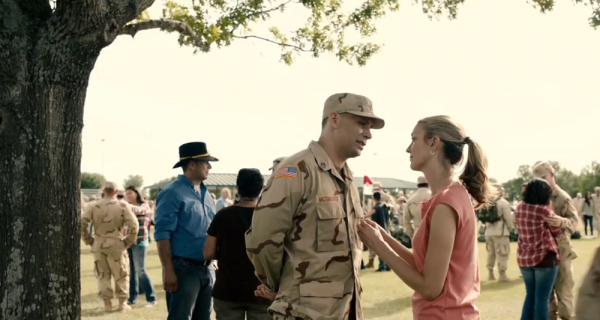 Days after releasing an emotionally charged new trailer for The Long Road Home, National Geographic is unveiling another look at the upcoming miniseries about a routine patrol that went sideways in Sadr City in 2004. The new two minute-long teaser, provided exclusively to Task & Purpose, focuses on the toll deployments can take on the military families and spouses who remain behind when their loved ones go off to war.

The video, a mix of behind-the-scenes interviews and clips from the show, stars Kate Bosworth, Katie Paxton, and Sarah Wayne Callies, who play military spouses in the eight-episode miniseries, premiering Nov. 7 on National Geographic.

“I come away from a story like this and I think: God help you, you better have a really good reason to send these kids overseas, because someone is gonna have a man in a suit show up at her door, and she’s going to have to figure out how to live the rest of her life,” Callies, who plays Leann Volesky in the series, remarks in the trailer

Based on journalist Martha Raddatz’s best-selling book of the same name, the scripted miniseries follows a platoon of 1st Cavalry Division soldiers after they’re ambushed during their first patrol in Baghdad’s Sadr City and are cut off inside the labyrinthine suburb. The real-life events behind the show began on April 4, 2004, dubbed “Black Sunday.” The battle that followed lasted days, resulted in the deaths of eight U.S. soldiers, and left more than 60 wounded.

Related: New Trailer For Nat Geo’s ‘The Long Road Home’ Is A Haunting ‘Rendezvous With Death’ »

Though The Long Road Home is driven by downrange events following the ambush, the show pans back to Fort Hood, Texas, in a sweeping narrative that captures both brutality of urban combat and the emotional havoc on a war’s homefront.

“The unspoken duties of spouses are incredibly huge,” Paxton, who plays Amber Aguero in The Long Road Home, said in the trailer. “If you have children it’s all about keeping those kids on a routine. It’s making sure they don’t forget who their parent is, who’s oversees. They understand what they’re doing in some capacity, but at the same time, shielding them from thinking that maybe their dad may be hurt, or in trouble, or in danger.”

Directed by Mikael Salomon (SIX, Band of Brothers) and Phil Abrams (Daredevil, Mad Men, Orange is the New Black), The Long Road Home consulted 1st Cavalry Division veterans who fought in the battle for the upcoming series, with some of the actors pairing with the real-life soldiers they’re portraying on screen.