The ‘Far Cry 5’ Endings Are Both Perfect And Insane

Far Cry 5 recently broke the $300 million mark in sales, and with good reason. The game, like its predecessors, … Continued 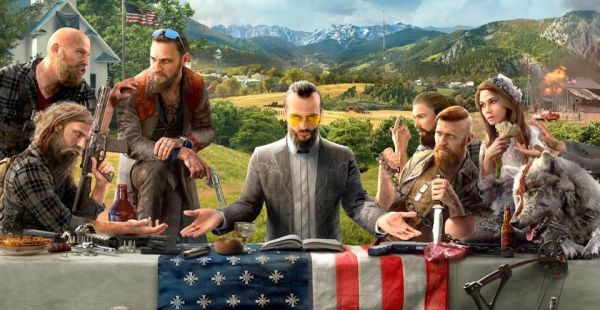 Far Cry 5 recently broke the $300 million mark in sales, and with good reason. The game, like its predecessors, is a beautiful, hyper-violent romp through the countryside: you find yourself helping out some cowboy preppers in a fight against a homegrown enemy in a bloodthirsty doomsday cult. But after you shoot, stab, and drive your way to the final bad guy, things take a weird left turn.

As far as gameplay goes, Far Cry 5 offer up a slew of unique missions. One involves keeping the cultist from voting, because the incumbent senator wasn’t able to gerrymander their cult compound out of his district. Another has you tracking down a diabetic grizzly bear named ‘Cheeseburger’ who escaped from a zoo. Many storylines are driven by a satirized fear of big government and the well-worn American impulse of rugged self-reliance. These aren’t unfamiliar tropes, especially today.

But there’s one thing Far Cry 5 has that most games don’t: based on how you act in key moments of the game, you end up encountering three distinct endings, all of which are mind-benders.

The first ending is honestly the sanest one. The game kicks off with your character, a rookie sheriff's deputy, inside a helicopter that is circling the cult compound headquarters. Looking down, you can see the dozens of heavily-armed cultists, which somehow doesn't faze the lone U.S. Marshall sent to arrest the cult leader.

As you walk through the compound and up cult leader Joseph Seed, the marshall orders you to cuff him. If you do not cuff him, you and your party walk out of the compound alive. The marshall, confounded by the turn of events, asks the sheriff what in tarnation you think you are doing, to which he replies ‘saving all our lives.’ The team walks out of the church and the game fades to the credits.

All of this occurs within the first ten minutes.

The second alternate ending is similar, but it only occurs after you have defeated all of the other main enemies in the game, forcing a final confrontation with Seed. In this case, Seed again gives you the option to just walk away, which cuts to you in a car driving off with the sheriff and his two deputies.

The sheriff tells everyone that they are going to go get the National Guard. This seems like another really sensible ending. But then it flips, the sheriff throws on the radio, and a song that was used to brainwash you into an assassin in another part of the game comes on leading to a murky ending that fades to black. But the implication is that you just kill everyone in the car.

The final ending, which for the sake of future downloadable expansion packs is the canonical ending in the Far Cry franchise, is much more batshit insane. You fight Seed, you arrest him for being an insane cult leader, and then the world ends in fire as nuclear weapons detonate all around the valley.

Throughout the game, there are small radio broadcasts hinting that the political climate outside the valley was headed for something catastrophic, but caught up with cultist and the like, it’s easy to ignore. As the world is filled with nuclear fire, you make a desperate race to Dutch’s bunker to survive the fallout. Right as you make it to the entrance, your truck gets in a wreck which allows Seed to escape.

As you wake up in the bunker, Dutch is unconscious on the floor, and Seed is looking you in the eye, gloating because he was right all along. The world did end.

Perhaps the ending was a bit dark, but the conventional ending, with the bad guy getting thrown in jail would have been uninspired. With this explosive change from the norm, Far Cry 5 has raised the bar for storytelling in video games. Plus, a Far Cry 6 set in the apocalyptic wastelands of the Midwest sounds like a great way to make another 300 million dollars.