Just How Fast and Furious Is The ‘Fast And The Furious’ Franchise?

It’s official: “The Fate of the Furious” just blew everyone’s damn mind. The eighth installment of the beloved (and extremely... 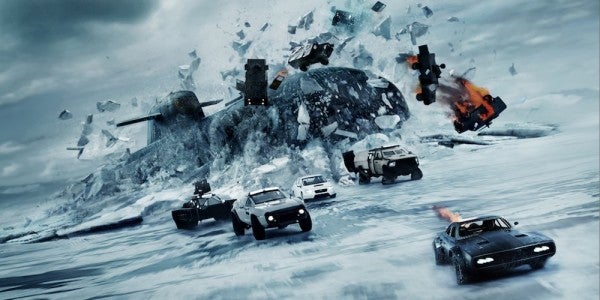 The eighth installment of the beloved (and extremely lucrative) “Fast and the Furious” racing-heist-car-chase-explosion-dodging franchise debuted this past weekend, pulling down a record-breaking $532.5 million at the global box office and beating out previous record-holders “Star Wars: The Force Awakens” and “Jurassic World.”

The series isn’t going anywhere: Vin Diesel confirmed in 2016 that audiences should plan on enjoying more full-throttled action with sequels scheduled for 2019 and 2021. But it’s hard to imagine a sequel that will prove faster — or more furious — than last weekend’s release. Wrecking balls! Prison breaks! Nuclear subs! The Rock vs. Vin Diesel, Round 2!

To gauge the sheer scope of the franchise’s speed and fury, Bloomberg tasked a gaggle of lucky reporters to sift through the 16 years of fast cars and big guns, booty shaking and Corona sips, to quantify just how ridiculous the action franchise truly is. To help, we’ve pulled out the juiciest morsels of charbroiled racing awesomeness packed into the first seven films for your consumption.

Dominic Torreto and his crew spend just over 46 minutes racing during the entire “Fast and the Furious” franchise— a full one-hour episode of a regular TV series, without the commercials.

While the franchise started out more focused on racing — “2 Fast 2 Furious” had nearly 14 minutes of racing, outmatched only by 15:10 of action in “The Fast and the Furious: Tokyo Drift” — the time spent burning rubber quickly declined once Dominic Torreto (Vin Deisel) and his crew became more focused on heists and whatnot.

In fact, Bloomberg points out that “time spent racing” was quickly replaced with “time spent chasing” with “Fast and Furious,” the franchise’s fourth installment. By “Fast 7,” the cast spent a full half-hour chasing each other, much to our delight; the only racing was a 33-second joyride meant to jog Letty Ortiz’s (Michelle Rodriguez) memory.

That’s not including 11 minutes of engine-revving …

Despite the decline in racing, the “Fast and the Furious” producers didn’t spare the aggressive engine-revving (although the vehicular intimidation is conspicuously absent from “Fast and Furious 6”).

Which I have nothing to say about, other than that you should stop what you’re doing and watch this supercut of every gear shift from the franchise:

… and nearly 48 minutes just talking about racing. Or cars. Or both.

To be clear, this means that, across the first seven installments in the “Fast and the Furious” franchise, Dom and his buddies spend more time actually talking about their sick rides then, you know, sickly riding in them.

Dom and his crew spend three times as much time chasing as they do racing:

Despite the franchise’s roots in illegal street racing (the original “Racer X” story on which the first movie was based, authored by Ken Li for Vibe magazine, is a classic and must-read), the “Fast and the Furious” enterprise has expanded to encompass all manner of heists, boosts, schemes and escapades across the planet. And with good reason: how else could producers think to include human bicep Dwayne “The Rock” Johnson if not for scenes like this?

But this means that the cast spent a good two hours chasing each other in all manner of vehicles. Honestly, you could release a feature film that’s just chase footage from the franchise and it would still go gangbusters.

Bloomberg counts 33 explosions with cars (and 22 without cars, frown) throughout the entire franchise. “2 Fast 2 Furious” was totally explosion-free, for some bizarre reason, while “Fast 7” contained more explosions than the previous six films combined. Hooray!

The amount of time Dom and Co. spend waving firearms around onscreen comes out to a extremely murder-y hour and 45 minutes, which might explain where the “Furious” comes from in the franchise. (Bloomberg notes that “Tokyo Drift” features the least gunplay, primarily due to Japan’s strict gun laws).

… and vehicles ridden on.

The nearly-three hours spent both racing and chasing through the first seven films of the franchise also include just over 22 minutes in which some character rides atop a moving vehicle, which definitely seems like a violation of most traffic laws. Sadly, this stunt doesn’t show up at all in “Tokyo Drift,” proving that the third installment of a series is always the worst.

Finally, the franchise is deceivingly light on the ladies …

While the earlier films portray the racing lifestyle as one chock full of all manner of, er, assets, the franchise is actually quite sparing when it comes to what Bloomberg tastefully calls “gratuitous female rear-end time,” with only 4:23 of “booty shots.” In fact, the only rump time that totaled more than a minute came with 2005’s “Fast Five” — which was set in Brazil.

… but heavy on biceps:

By contrast, we’re treated to marvelous guns for nearly 100 minutes over the course of the seven films, the majority during “2 Fast 2 Furious” in Miami. We knew there was a reason you were watching. 😉

If that doesn’t get you amped up for “The Fate of the Furious,” perhaps the trailer will do: