Long before Frank Castle swapped his cammies, plate carrier and Kevlar for a set of black body armor emblazoned with... 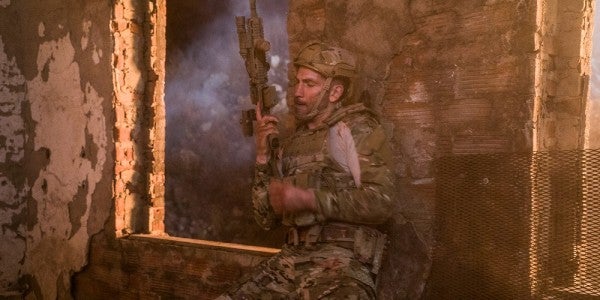 Long before Frank Castle swapped his cammies, plate carrier and Kevlar for a set of black body armor emblazoned with a leering white skull and set out to punish the world’s criminals as The Punisher, he was a U.S. Marine. And it looks like Marvel and Netflix plan on giving us a glimpse at Castle’s wartime service.

On Sept. 12, Netflix released a string of new promotional images for The Punisher, the latest preview ahead of the closely kept release date the streaming service can’t resist teasing. Among the photos was an image of Jon Bernthal’s Frank Castle, kitted up, armed, and, in all likelihood, in a warzone.

With Netflix and Marvel's The Punisher we might get to see Jon Bernthal's Frank Castle as a Marine, and maybe the show will explain why he's rocking MULTICAM instead of MARPAT.Photo via Netflix

If it’s a flashback, it’s probably somewhere in the Middle East, given what we learned of Castle’s battlefield heroics in Pakistan, Iran (we’ll ignore the ridiculousness of this scenario), and Afghanistan in Daredevil’s second season. In northeastern Afghanistan, while serving as a recon Marine, Castle single handedly annihilated an enemy ambush, for which he was awarded the Navy Cross.

Adding to the hunch that The Punisher will feature some flashbacks to Castle’s time in the Corps, is the episode list, which was released in morse code on twitter last month. Among the episode titles were more than a few that have a uniquely military vibe: Kandahar, Gunner, Cold Steel, Front Toward Enemy, and Danger Close.

That look says that maybe he messed up on the white skull spray paint job, and it came out as a smiley face instead.Photo via Netflix

Another image shows Castle in a dilapidated warehouse holding a black set of body armor, possibly a safehouse to lay low from the unknown enemy hunting him. And based on a second teaser posted to the shows official count the same day, it’s possible this hideout belongs to an ally — an ally teased in yet another promotional video tweeted by the show’s official account:

How deep does the cover up go? pic.twitter.com/q6HIt1G0Ou

The tweet features cryptic passages mentioning Kandahar, a cover up (which was alluded to at the end of Daredevil season two), and Micro, a cyber super-sleuth and hacker who teams up with The Punisher in the original Marvel comics to provide support and intel.

Frank Castle exercising those reconnaissance muscles from his time in the Marines.Photo via Netflix

Other photos showed Castle and Karen Page, played by Deborah Ann Woll, meeting secretively, and indicates that the relationship the two formed in Daredevil season two hasn’t eroded now that Castle’s successfully hunted down the men responsible for his family’s death. After all, he’s going to need some help now that he apparently has a target on his back.

For a relationship that started with Frank Castle shooting at Karen Page in a hospital, it's certainly improved.Photo via Netflix

Given how important his military service is to his identity, it’ll be exciting to see Castle as a Marine, whether there’s a prologue episode or just a few flashbacks. Compared to other Marvel heroes who spent time in uniform, Frank Castle’s military service continues to drive and guide him, and it goes far beyond his skill with firearms.

If you're close enough to see the skull, it's too late.Photo via Netflix

In Daredevil season two, when Castle was given the option to claim post-traumatic stress disorder in order to get a leaner punishment during his trial, he declined, seeing it as a disservice to the men and women who actually needed help. In Castle’s eyes, it wasn’t combat that broke him: it was the lawlessness and cruelty he witnessed when he came home. And it’s that mix of moral steadfastness and a willingness to do the hard, but right thing — in Castle’s eyes at least — that makes him such an intriguing anti-hero to so many.

“He takes with him a military code for accountability and responsibility and he is very much an objective oriented person,” Gerry Conway, one of the character’s original creators told Task & Purpose in March 2016. “There’s not a lot of room for nuance when you’re in a firefight. … He in that sense has a certain appeal.”