Yet another World War II movie is coming to the big screen, but this one is different. No, really. The... 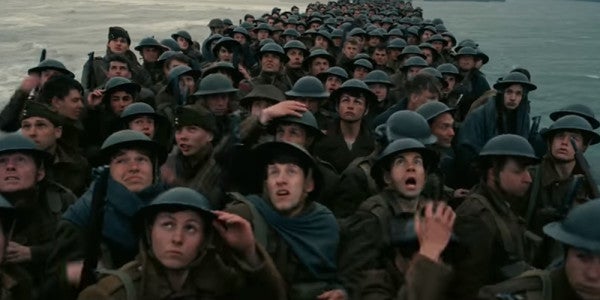 Yet another World War II movie is coming to the big screen, but this one is different. No, really.

The new trailer for Christopher Nolan’s upcoming war drama, “Dunkirk,” is barely a minute long and has no dialogue. The closest it comes to narration is an ominous ticking clock and the piercing scream of incoming aircraft, but that’s all it needs.

The movie is set between May 27 and June 4,1940, more than a year before the Pearl Harbor attack prompted the United States’ official entrance into World War II. Nolan’s war drama centers on the Battle of Dunkirk, where Canadian, French, and Belgian soldiers made a daring escape after being surrounded by the German army at Dunkirk Harbor, France.

The trailer shows beleaguered men in helmets shuffling along a thin bridge, juxtaposed with scenes of the dead scattered across sandy a beach. It ends right as a soldier looks upward, an expression of pure terror on his face as the screeching of an enemy plane reaches a fever pitch.

The upcoming war drama seems likely to focus on the evacuation of the Allied soldiers and the incredible sacrifice of their predominantly French and British rearguard. According to BBC, by the battle’s end 558,000 British, French, and Belgian troops made good their escape.

Correction: 8/8/2016: 10:55 p.m: An earlier version of this article misstated that the soldiers in the video were wearing “doughboy” helmets.