There’s a new Navy submarine flick coming to theaters in the Fall. Hooyah! (See!? See how easy that was?) Based... 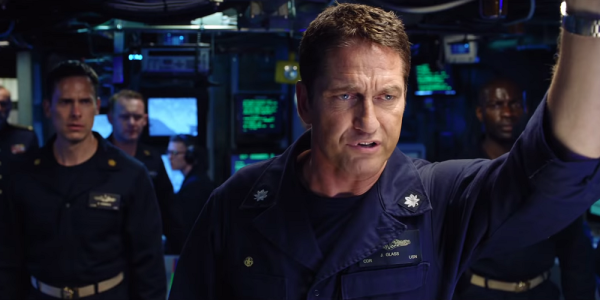 There’s a new Navy submarine flick coming to theaters in the Fall. Hooyah! (See!? See how easy that was?)

Based on the trailer, Hunter Killer has the feel of The Hunt For Red October if Michael Bay was allowed in the editing room. Starring Gerard Butler and Gary Oldman and directed by Donovan Marsh, the sub-based fiction flick seems to be a send up to those military espionage thrillers of the mid-80s and early 90s, back when Tom Clancy was king, Sean Connery could pass for Russian, and military-themed movies had enough sense to shoot for authenticity in addition to technical accuracy.

Those days, well, they’re not gone. But sometimes it feels like in a rush to nail the really big stuff — true-to-life depictions of military maneuvers, arms and equipment, and semi-realistic combat sequences — filmmakers skip over the really simple shit. Like, say, matching the right mottos with their military branches.Which explains why, just 30 seconds into the trailer for Hunter Killer, we see a gung ho Butler rally his sailors with a hearty: “Oorah!”

I really have no idea why King Leonidas didn’t get Spartan kicked by an actual sailor as he or she screamed “THIS IS THE NAVY!”

For those not in the know, that’s not what sailors say — “Oorah” is a Marine thing. What makes it all the more surprising, and odd, is that the Navy actually had a presence on set. The film crew had access to “active-duty submarine subject matter experts,” as well as bases, subs, and other active-duty Navy personnel, according to Military Times’ J.D. Simkins.

Related: The Omaha Beach Landing In ‘Saving Private Ryan’ Changed How We Look At WW2 »

Sure, the “Oorah” vs “Hooyah” goof is minor, it does make me wonder what other oversights made it through to the final cut. Assuming that’s the only one, I’m sure Hunter Killer will be a thrill-ride as we join the submarine crew on an explosive trek across the Arctic Ocean on a mission to rescue the president of Russia in order to save the world.

Okay, seeing as that's the plot, I may have to lower my expectations for realism when the movie premieres on October 26.

H/t to J.D. Simkins at Military Times for drawing my attention to the “oorahs” in a Navy submarine flick. Lol, why’d they do that. WHY!?