I Drove The i-Road, Toyota’s Crazy Half Motorcycle Concept Car

Mobility and technology are critical parts of not just battlefield strategy, but the development of humanity. Vehicles of the future... 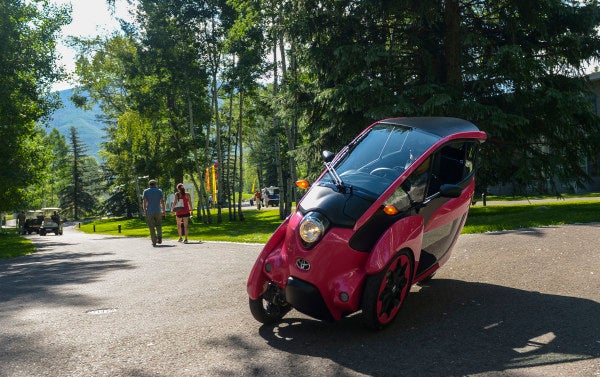 Mobility and technology are critical parts of not just battlefield strategy, but the development of humanity. Vehicles of the future need to be less dependent on fossil fuel, but also smaller and easier to park. Last week, in Colorado for the Aspen Ideas Festival, I had the chance to step behind the wheel of such a vehicle.

It’s called the i-Road, a concept car developed by Toyota, and it’s a strange sight. There’s only room for one passenger, and there are three wheels — two in the front, run in the rear. The vehicle is electrically powered, able to go 30 miles on a single charge, and is limited to 35 miles per hour, according to the folks at Toyota.

The i-Road is designed for short distances in urban areas, a logistical and transportation challenge that will only stand to grow larger over time.

“Looking at population increases, we’re going to add another 2 billion people by 2025,” Jason Schulz, a business development manager at Toyota, told Task & Purpose in Aspen. “You look at that, you look at where people are moving now, a lot of folks are moving back to city centers, so that creates density issues.”

The i-Road addresses these issues by being small, sustainable, and easier to park.

“For us, it’s about providing mobility solutions across the spectrum,” Schulz said.

What’s more, it’s a ton of fun. I really didn’t expect the little thing to be as fun as it was.

“Part of our core is really about fun to drive, and you can see that resonate really well with i-Road,” Schulz said.

Climbing into the driver’s seat feels a bit like getting into a cockpit. It’s a strange feeling to have windows directly to the front, left, and right. With the release of an emergency brake, the start of an engine, and the push of a button, I was off in my pink i-Road, weaving through a course of cones at Aspen High School.

The turning is sharp, and the i-Road really leans into them like a motorcycle, even though it’s all done by steering wheel.

Schulz said the platform is a bit more safe than a motorcycle, because it is enclosed and protected from the elements, and that the three-wheeled platform lends itself toward stability. I really never got the sense the i-Road could flip over, even when holding down the wheel all the way and doing donuts in the parking lot.

Schulz said the i-Road is coming to American markets some time in the future, but as it’s still a concept, Toyota is still figuring out when. Pricing, he said, will be competitive with the market.

Watch the full video from my test drive below. I didn’t even knock over any cones.