The bond between a group of combat veterans and wild wolves, both suffering from post-traumatic stress disorder, is the focus... 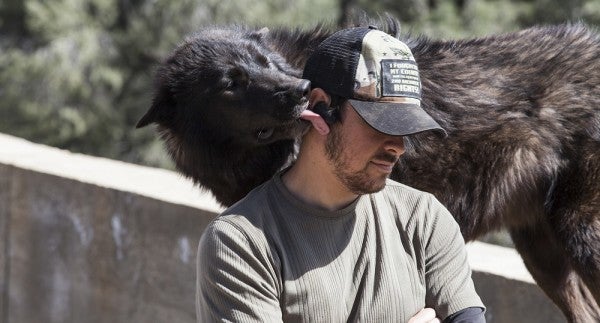 The bond between a group of combat veterans and wild wolves, both suffering from post-traumatic stress disorder, is the focus of an upcoming documentary called “The War In Between.”

The film is set at the Lockwood Animal Rescue Center, or LARC, where wolves rescued from roadside attractions, breeders, and other exploitative situations, are paired with veterans suffering from mental trauma sustained in combat. The back-to-nature therapy retreat is located on 20 acres in the Los Padres National forest in Ventura County, California, and is home to about 40 rescued wolves.

A wolf at the Lockwood Animal Rescue Center in Los Padres National forest in Ventura County, California, nuzzles the leg of one of the program’s participants.

Filmed over the course of a year and slated to premiere in September, filmmaker Riccardo Ferraris’ documentary highlights the relationship between wolf and warrior and how the experience of being welcomed into a pack, canine or otherwise, can be cathartic.

“What I see here with the veterans is the rekindling of the 13-year-old-boy before the trauma,” said Matt Simmons, the program’s founder, in a press release about the film. “It's amazing to be accepted in a pack that usually accepts only its own offspring. It's a miracle that only happens here at LARC.”

Check out the trailer for “The War In Between” below.