This Insane Animated Dogfight Is A Total Mindf*ck 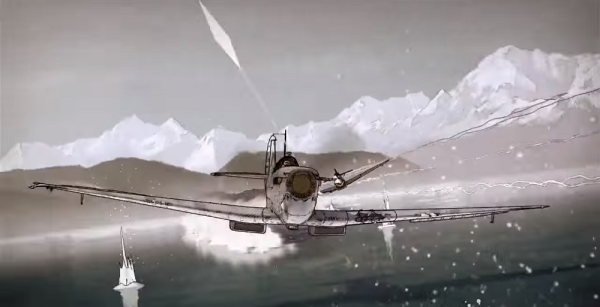 One animated film found a way to combine three of the veteran community’s favorite things: Badass combat sequences, World War II, and zombies. Called “Paths of Hate,” it’s a Polish short film with the look and feel of a gritty graphic novel set during the second world war.

A German Messerschmitt Bf-109 and a British Supermarine Spitfire perform a murderous, elegant dance in the sky, spewing rounds back and forth during a dogfight. Over the course of the 10-minute film by Damien Nanow, the fighting becomes increasingly intense, then desperate, until it spills over into the surreal. Visually stunning without being too artsy, “Paths of Hate” fluctuates between chaotic violence and full-blown madness.

While there are some technical errors, like the fact that the pilots fly with two hands on the stick, instead of one on the throttle, and the aerial maneuvers border on the unrealistic, that’s probably because the 2010 film was created by a recent college graduate, not a WWII fighter ace. Nenow came up with the concept while an undergraduate at the National Film School in Łódź, Poland.

“‘Paths of Hate’ is a short tale about the demons that slumber deep in the human soul and have the power to push people into the abyss of blind hate, fury and rage,” reads the website for Platige Shorts, the production company behind Nenow’s animated film.

Related: The Dust, Violence, and Discord Of War Brought To Life In One Incredible Video »

At one point, the fight seems to be at its end. Their ammo is spent, both planes are riddled with bullet holes, and the pilots are bloodied and battered. The aircraft rattle and shake as smoke and small fires indicate that even their machines have had enough.

The planes fly alongside one another, and for a moment it’s serene as they begin to drift away, before flying off in opposite directions. It’s over.

They immediately turn back around as human faces literally fall away, and the physical manifestation of the pilots’ rage is all that’s left. Now resembling zombies more than humans, they’re right back at it. It goes on for a few more dizzying minutes before culminating in a head-on, mid-air collision as the pilots are flung from the aircraft, pistols in hand, and continue their self-destructive battle on the ground.

The film’s symbolism is overt, with the audience practically beaten over the head with the message: Hate and violence lead to self-destruction. Whether or not you agree with that, one thing is certain about “Paths of Hate” — it’s really fucking entertaining.