For a film bristling with sporadic visual odes to the armed services and, by association, the military-industrial complex, there's one scene in 'Iron Man' that accurately captures the strange irony of how the military fits into the ever-expanding constellation of superhero and sci-fi films in the marketplace 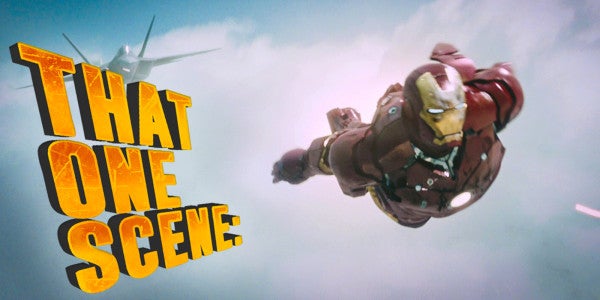 Everyone was supposed to hate Iron Man. Before he was “genius, billionaire, playboy, philanthropist,” as he described himself in The Avengers, Tony Stark was basically a glorified arms trafficker who survived and thrived on the careful allocation of death and destruction that is the military-industrial complex. Introduced during the birth of the anti-war movement, even Iron Man creator Stan Lee — known for his socially-conscious and politically-inflected characters and storylines — thought Marvel Comics’ audience would hate him too much, rejecting Stark outright for the money in his pockets and the blood on his hands.

“I think I gave myself a dare. It was the height of the Cold War. The readers, the young readers, if there was one thing they hated, it was war, it was the military,” Lee once said.

“So I got a hero who represented that to the hundredth degree. He was a weapons manufacturer, he was providing weapons for the Army, he was rich, he was an industrialist. I thought it would be fun to take the kind of character that nobody would like, none of our readers would like, and shove him down their throats and make them like him … And he became very popular.”

Little has changed in the decades since Stark first donned his suit of armor: as a movie, Iron Man is as much a product of the U.S. military-industrial complex as it is an overt critique. Sure, Tony Stark may turn from weapons dealer to armored peacenik, but it’s no secret that the Defense Department was happy to provide far-reaching production assistance agreements for the first two installments of the trilogy, furnishing Marvel Studios with everything from technical assistance to “production value” — soldiers, vehicles, and locations (see the C-17s at Edwards Air Force Base in Iron Man 2). Indeed, the DoD was more than happy to work with Marvel Studios until the “unreality” of The Avengers induced the Pentagon to halt its cooperation with the cinematic juggernaut (although that didn’t last long — just look at Captain Marvel).

As a result, the military is not just enthusiastically, but somewhat accurately, represented in those films — well, as much as it can be for a comic book movie. But for a film bristling with sporadic visual odes to the armed services and, by association, the military-industrial complex, there’s one scene in Iron Man that accurately captures the strange irony of how the military fits into the ever-expanding constellation of superhero and sci-fi films in the marketplace.

The scene itself comes at the peak of the movie, during the second act: Stark is just starting to test the limits of his armor with a visit to the fictional town of Gulmira in Afghanistan, which finds itself under attack by the terror group that took our hero hostage at the film’s outset. Stark is in the middle of a moral transformation; indeed, he’s only induced to travel to Gulmira after seeing footage of his own Stark-branded weaponry in the hands of militants abroad in a vaguely CNN/BBC-inspired newscast.  After extrajudicially executing the terrorists and destroying the weapons, Stark is intercepted over Kunar province (spoiler: it looks nothing like the Kunar province) by a pair of F-22s who just happen to be patrolling the area.

The dogfight is enthralling.

Stark deploys flares to deal with an incoming missile before a hail of high-caliber gunfire from one of the Raptors forces him to deploy his flaps — and end up on the underside of one of the F-22s. What happens next is an unmitigated disaster: the F-22 rolls, sending the armored Stark tumbling into his wingman’s starboard wing and sending them both plummeting towards the ground. Stark, being the hero, saves the pilot’s ass when his parachute won’t deploy, and the climactic scene ends in a distinctly unclimactic manner: with Air Force Col. James Rhodes (a Marine aviator in the comics, but I digress) covering up the whole incident as a training mishap in which, thankfully, nobody died.

While the Air Force’s entertainment liaison office may have viewed this entire sequence as all but a giant ad for the F-22, long the subject of its own production drama in military and legislative circles, let’s be real: the entire sequence is basically one long Class A mishap, and the only thing that would make it more realistic is a caveat that yes, the investigation into the incident is still ongoing as of Iron Man 2 when Rhodes eventually bogarts a suit of armor for the Air Force to weaponize.

The F-22 doesn’t come out looking particularly dominant or even that glitzy; in actuality, it’s just scenery for Stark to chew up while on his path to gathering more super-powered buddies for some extralegal justice.

All of this aside, the sequence gets to the heart of the representation of the military-industrial complex in a major Hollywood action flick specifically and comic book movies more broadly: unless you’re a specific protagonist, you’re there to get blown up or shot — and the Defense Department will subsidize it in the name of good press.

This is a trend throughout comic book movies and their cinematic cousins. Just consider the S.H.I.E.L.D. helicarrier in The Avengers, laden with F-22s and F-35s … that are subsequently dropped into the ocean when one of the carrier propellor assemblies is blown to shit by a man with a bow and arrow.

It also applies beyond Marvel films: the A-10 Thunderbolt IIs that turn up in DC’s Man of Steel are no match for Kryptonians, present only to show how strong their adversaries are before they explode. And forget comic books: while Michael Bay’s Transformers trilogy is basically a commercial for special operators and their high-tech gear (see: the Ospreys in the fifth installment), they’re no match for alien tech that falls from the sky. The military exists only as a means to compare and contrast — to show the scale of some new power, foreign or domestic — before getting the shit beaten out of them.

There’s nothing wrong with this so far as storytelling goes, of course: U.S. military personnel aren’t the central heroes of these stories, which focus on more otherworldly phenomena (sorry, Captain America). But there’s a delicious sliver of irony that, despite the fact that these cinematic appearances are supposed to be advertisements for the U.S. military, that one scene in Iron Man actually captures a sad reality of the military-industrial complex: for all the money and investment spent on high-tech military equipment, this shit breaks and breaks often — and U.S. service members usually pay the price.

Rhodes’ cover for the incident — a training accident — is painfully on-the-nose when you consider that training accidents kill more U.S. troops than combat each year. The sequence isn’t a warning that a man in powered armor might drop you out of the sky; it’s that a freak accident will. War is a deadly business, and for a split second in Iron Man, the story’s comic-book mask falls and the mortality of the enterprise comes to the front.

Stark, of course, learns the true meaning of this mortality, first with the shrapnel stuck in his chest at the beginning of Iron Man and with the end of his character’s arc in Avengers: Endgame. And the U.S. military also finds its own heroes as Rhodes dons the War Machine armor and is joined by fellow veterans Sam Wilson (The Falcon) and Carol Danvers (Captain Marvel) in the Avengers’ roster. But otherwise, Iron Man features one due taking the Air Force’s favorite fourth-generation fighter to pieces by accident — and it’s considered a public relations win for the Defense Department.

There are plenty of heroic stories to tell about U.S. service members, and it’s certainly not Marvel’s obligation to tell them, but Iron Man sets a precedent for fictional troops in its future cinematic offspring: if you’re on duty when a hero comes by, chances are you’ll end up as collateral damage.

If that’s not a perfect description of the all-consuming military-industrial complex, I don’t know what is. The Pentagon frequently touts next-generation tech that doesn’t work, from the notoriously-beleaguered F-35 to the still-in-development USS Gerald R. Ford supercarrier. In fact, the Iron Man suit is the only piece of military-funded tech (Stark does live off of weapons contracts, of course) that actually does what it’s supposed to do, and it makes everything else look like an uber-expensive shit-heap in the process.

In this sense, Iron Man may appear like DoD-approved valorization of the military-industrial complex, but it really captures the limits of how the military can portray itself in a world populated by earthbound super-soldiers and alien demigods. And while there are exceptions (Battleship, anyone), the movie reveals the delicious irony of the relationship between the Pentagon and Hollywood in an era of superhero films: U.S. service members are little more than collateral damage for a juggernaut of cinematic profit — and the DoD is totally OK with that.