What’s the best way to celebrate that 365th day of the nth year since you came kicking into this world?... 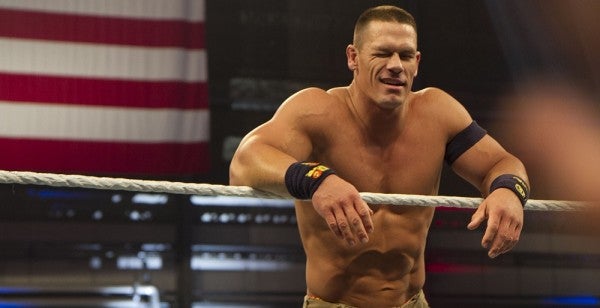 What’s the best way to celebrate that 365th day of the nth year since you came kicking into this world? For many, it’s shots, shots, shots. For John Cena, it’s lifting a barbell-bending stack of Cadillacs.

Why? Because he can.

To celebrate his 40th birthday, the professional wrestler and actor-turned-reality TV show host posted the video of himself crushing it at the gym on April 23.

Well-known as Cena is for being a wrecking ball in the ring or at the gym, it’s his quirky humor — a mix of fart jokes and deadpanning — that endears him to his fans. A meme unto himself, there’s his occasional show-stealing cameos — pretty much the best parts of either “Trainwreck” or “Sisters” — and that time he bared his “tube on YouTube,” with his fiancée, wrestler, actress, and model Nikki Bella.

Related: John Cena Gets Serious In New Role As An Army Sniper »

Beyond the humor and lightheartedness, the baby-faced bulldozer of a man does have a serious side, which he put on display last July 4, in a thoughtful and heartfelt public service announcement. When he’s not making sentimental PSAs about patriotism, he’s out and about actually being a patriot, showing his support to wounded warrior-athletes and participating in USO tours.

Cena’s making a return to the silver screen as an Army sniper in the upcoming wartime thriller, “The Wall,” which looks intense. In fact, it may just be good enough to make us forget about “The Marine.” That would be a pretty good birthday present.