There have been many different versions of John Cena over the years — wrestler, rapper, action hero, comic actor, reality … Continued 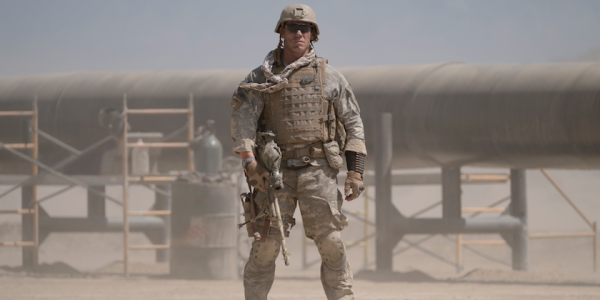 There have been many different versions of John Cena over the years — wrestler, rapper, action hero, comic actor, reality TV host — but, really, they’re all variations of the same thing: He’s a monster. Like, come on, the guy deadlifted 602 pounds on his 40th birthday. What was he doing in a gym on his birthday? Why wasn’t he pounding foot-long margaritas in Cabo San Lucas? Because he was being John Cena. And John Cena never takes a break from being John Cena.

“Time is my greatest luxury, and it also seems to slip away from me the fastest,” Cena said in a phone interview with Task & Purpose. “There’s a lot of stuff I just don’t get to get out and do.”

This week, Cena will appear in full battle rattle alongside “Kick-Ass” star Aaron Taylor-Johnson in “The Wall,” an Iraq War film about two Army Ranger snipers who find themselves in a tense standoff with an enemy sniper who may or may not be better at his job than them (you have to watch the movie to find out).

Cena likens the film’s premise to a game of chess, and it is — except the characters pay for their wrong moves by getting perforated by a high-caliber rifle, which makes “The Wall” more of a psychological thriller than an action film. And this is a version of Cena his fans haven’t seen yet.

“I think people will watch the movie and not even know that it’s me,” Cena says.

With “The Wall” due to hit theaters nationwide on May 12, Task & Purpose spoke with Cena about his time in the Middle East, his favorite war film, and why Rangers lead the way.

How did you prepare for this film?

I don't want to tell you that I had to do a lot of training. I had a good friend who helped me, and who I also worked with on the set of American Grit — Nicholas Irving. He was an Army Ranger, and also happened to be a sniper. A couple of long conversations with him and having him on set really helped make sure that we were tactically in place so we didn't do injustice to our service men and women.

The military lingo and mannerisms throughout the film are very on point. Was that written into the script or did you guys improvise a lot of that?

Nick helped a whole hell of a lot on that. I know that Aaron [Taylor-Johnson] studied his ass off as far as consuming knowledge relevant to the script and also learning all of the acronyms and the slang. And then me, having hung around that element a bit, I could easily go back and forth.

There wasn't a lot of stuff I hadn't heard before. It really was a right mix of folks involved in the movie. Because the cast was so small it allowed us to create a bond very fast and go back and forth like we'd been on a few tours together.

What do you think the veterans and military audience will appreciate about this film?

I think the military will appreciate the authenticity of it. I think they will enjoy the ride of the entire film. But I do think it will hit home the biggest with people who weren't in the military, because they’ll gain a greater respect for everyone who puts on the uniform.

I know you guys filmed for like 14 straight days in the desert. Did that experience change your perspective at all on what it must be like for troops serving in the Middle East?

It certainly did. The elements were brutal, and I can say they were also almost identical to the Middle East, as someone who went over there six or seven times. It was incredibly well done, and the set really looked a lot like some of the areas that they had started to rebuild over there in 2007.

I think 14 days was an awesome amount of time. The days were extremely long, and having to get up and do essentially the same thing in those elements every day is pretty much what you would do on a six month or yearlong tour. Your jobs over there are pretty much the same thing every day. You’re in the gear all day. You’re in that heat all day. It’s those same conditions all day, every day. It was just enough time for us to get worn down and beat up and I think it certainly shows on screen.

Is there any one story from your trips to Iraq and Afghanistan that you always find yourself telling?

I truly take my hat off to the WWE, because when they do the Tribute to the Troops, it’s a well-oiled machine and they have an objective, and that objective is to meet as many people as possible. That takes just going out to places where nobody is. So many times on those tours, we’d meet people and they’d say the same thing: “Nobody comes out here.”

So this one time we went to a scouting observation post in the middle of nowhere, it was on the outskirts of the FOB, and there was a young female soldier manning a SAW in a tower, and when we came up there to greet her she just broke down and cried. She explained that she didn't know any of us, or who we were, but she was so emotionally overwhelmed that people came up to say hello to her. That’s something that has certainly stuck with me for quite a while.

What would you say is your favorite war film?

Man, so many. So many. I think “Saving Private Ryan.” The authentic treatment of the Normandy invasion is great for educating a new generation about World War II. I could waste 15 minute talking about all the war films I like, from “Full Metal Jacket,” to “The Patriot,” to “Hamburger Hill,” to the “Thin Red Line,” to “Platoon.”

But I think, big picture, “Saving Private Ryan” is it, because it has done a lot for this generation’s appreciation for World War II vets.

Why did you want to contribute to the genre?

The story just read amazing. I really dig the psychological thrill ride that you go on over the course of the entire movie. And I thought it really showcased conflict differently. It’s literally psychological chess. That’s not an element usually shown. Often, when you see combat chronicled on film, it is fast, it is very out of control, and there’s a whole lot of business going on. This is the about face of that. Every movement means something, and you get that feeling of suspense and intensity, and your senses are heightened just waiting for the next thing to happen.

Who did you aspire to be like when you were growing up?

Give me an age and I'll tell you. As a young kid, I was very whimsical, and imaginative, and always athletic. When you’re young, you have that imagination that you can do anything, and I don’t think I ever lost it. So throughout the course of my life, I’ve been drawn in different directions, and everything I’ve been involved with, I just try to give it the best I can. I’ve been lucky enough to just do stuff that I like to do, and even from an early age. I got interested in things early and stuck with that regardless of what people thought, or how they felt, and if I’m involved in something I’m going to give it my all.

Did you ever consider joining the military?

Yes, absolutely. I actually fell into the world of sports entertainment by accident. I was living out in Los Angeles, working a dead end job, just to spite my father, who told me I’d return to Massachusetts in two weeks. So I was holding my own, but I knew I needed to hold down something serious. It got to the point where I really needed to make a career out of my life. I was 22 years old and I needed some direction. And I thought about enlisting in the Marines. Literally, the weekend I made the decision to do it, a friend came into Gold’s Gym, where I was working at the time. We had always talked about WWE. And he said, “You look big, you talk like you know what’s going on, did you ever want to try out to do this?” I figured, yeah, I’ll give it a shot. As soon as I saw a ring, one that I could physically get in and mess around with, I knew there was no turning back at that point.

Why the Marine Corps?

I just thought because, of all the service branches, it kind of exemplified who I was as a 22-year-old. You think you’re bulletproof, and you can handle any sort of resistance put in front of you, and you’re gungho to the hilt. I’m still all that stuff today, I just have another two decades of knowledge under my belt, so I move a little bit smarter on the chess board. But I’d admired everything they stood for.

Well, a lot more stuff blows up when you play a Marine than when you play an Army Ranger. I really did like contributing to this film more. I think the people who remember “The Marine,” will remember just a crazy amount of action. But I’m really proud of this story. As Nicholas Irving would say, Rangers lead the way.