Retired hitman John Wick, played by actor and human deadpan Keanu Reeves, may be the most ruthless killing machine to... 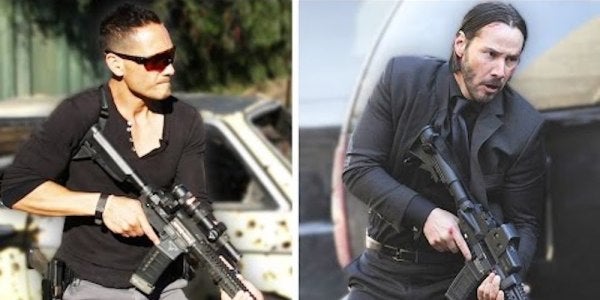 Retired hitman John Wick, played by actor and human deadpan Keanu Reeves, may be the most ruthless killing machine to grace the silver screen since Liam Neeson waged a one-man war on Albanian human traffickers in “Taken.” And with good reason: A fantastic video released by Taran Tactical in 2016 showed Reeves absolutely murdering a 3-gun drill, proving that the actor had what it took to effectively portray an expert gunsmith like Wick.

Whoa indeed. But now that “John Wick 2” is officially in theaters, we’re left wondering: Can any red-blooded American with a curious spirit and thirst for danger achieve the same proficiency that Reeves did?

To that end, the folks at BuzzFeed decided to send a few of their tried-and-true “hey let me do stuff I’ve never done before” civilian correspondents, Josh Davis and Sherial McKinney, to the same Taran Tactical range in California’s Simi Valley that Reeves destroyed to see how they’d fare in the brutal three-gun course, wielding a pistol, shotgun, and rifle.

The video is damn good, and we have to give BuzzFeed credit for sending in correspondents with minds open to the power and responsibility of firearms. “I’m a big advocate for women being seen as equals,” McKinney says at the beginning of the video, “just to show that we have what it takes to have power and be dangerous and be badass.” In fact, both Davis and McKinney emphasized just how much attention and practice went into learning to shoot with the deadly elegance of Reeve’s Wick, a nice contrast to those who think one touch of a revolver makes them John Wayne:

As soon as we got comfortable, we switched to doing it all in one motion, from shooting with the pistol, holstering it, going straight for the shotgun, picking it up, taking the safety off, and shooting your targets. You have to do it as quickly as possible, as accurately as possible but also safe — so you have all these different things going on in your head while you have a dangerous weapon in your hand. It’s pretty intense.

And that’s the beauty of the video. Sure, Davis and McKinney didn’t shred the range like Keanu, but they came away with a nice understanding of what it actually means to have a lethal tool in your hands — an understanding they gleaned with minimal political editorializing. As they used to say in the old Spider-Man comics, with great power comes great responsibility — and even learning to become a one-man murder machine John Wick carries that awesome responsibility.