Masterfully dropping enemies with a mix of three-gun shooting techniques, mixed martial arts, and whatever he has handy — he... 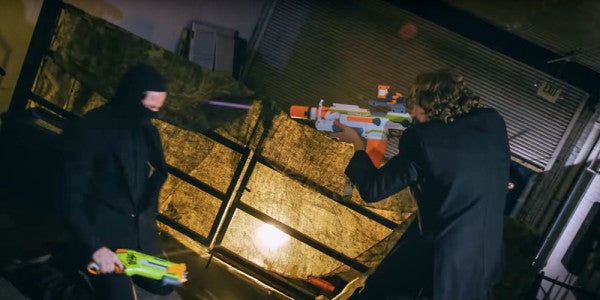 Masterfully dropping enemies with a mix of three-gun shooting techniques, mixed martial arts, and whatever he has handy — he kills two dudes with a pencil — all while maintaining a James Bond-level of style and panache, “John Wick” is like is like a kung fu master, but with guns. He’s a gun fu master. Yes.

Now, he’s brought his impressive set of skills to the least deadly battlefield: Nerf. Created by the hilariously inventive minds over at Corridor, a YouTube entertainment group, Nerf John Wick brings you blockbuster-level action and fight choreography, in a soft foamy package.

From speed reloads with plastic orange magazines, to some of the more outlandish — but unquestionably badass — scenes from “John Wick 2,” the short video is impressively close to the real thing. The main difference being instead of splattered brains and blood, it’s darts and foam balls to the face.

Related: In Hilarious ‘John Wick’ Spoof, The Dog Is Back And Looking For Vengeance »

The video has already racked up more than 1.3 million views on YouTube since it was uploaded on March 19, and it’s not really shocking why.

At one point, Nerf John Wick grapples with one attacker as another rounds a corner and opens fire. As the dart soars through the air, Wick reaches out, plucks it from the sky and jams it into the ear hole of his first victim, before grabbing the dying man’s Nerf pistol and dropping the other.

It’s one thing to brutally and emotionlessly kill an army of hitmen. It’s something else entirely to do it with Nerf darts and still look like a badass. Now when you spin out the kicks in the backyard and your kid’s dazed, dart-riddled friends ask where you learned that, you can say: “John Wick.”