With ‘Last Flag Flying,’ Hollywood Tries — and Fails — To Do Right By Veterans

Never in history have fallen warriors been so popular. Presidents trip over themselves to comfort their next of kin, and … Continued 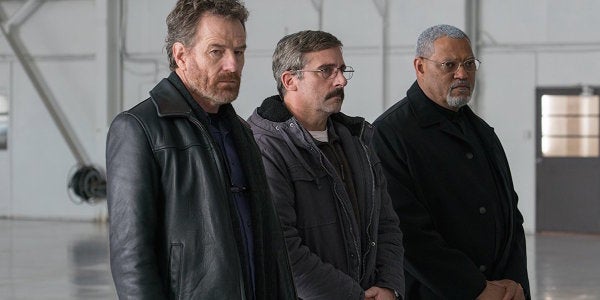 Never in history have fallen warriors been so popular. Presidents trip over themselves to comfort their next of kin, and their names are solemnly invoked by our finest talking heads. At a recent press conference, the White House chief of staff went so far as to take questions only from reporters who personally knew a family member of someone killed in action.

And why not? With the very definition of patriotism itself suddenly a hot topic of debate, their allegiance is unimpeachable. In a narcissistic age, their selflessness shames us all. As historical symbols come under harsh new scrutiny, their sacrifice is bracingly pure.

And conveniently, they’re not around anymore, which means they can’t complain when politicians, pundits, and keyboard warriors alike use their flag-draped coffins as handy stepping stones in their mad scramble for the moral high ground.

Is it any wonder Hollywood wants a piece of the action?

Hitting theaters on Nov. 3, director Richard Linklater’s Last Flag Flying centers on a retired Navy hospital corpsman, Larry “Doc” Shepherd (Steve Carell), who is still grappling with the loss of his beloved wife to breast cancer when he learns that his son, Larry Jr., a Marine lance corporal, has been killed in action in Iraq. Reeling and numb, he decides to track down his old Vietnam battle buddies and invite them on a road trip to bury his son at Arlington Cemetery.

Based on a novel by Darryl Ponicsan, Last Flag Flying was conceived as a sequel to the author’s acclaimed debut, 1971’s The Last Detail, which also told the story of three service members on a journey from Norfolk, Virginia, to Portsmouth, New Hampshire (the connection is more explicit in Poniscan’s novels). In the the classic 1973 film based on The Last Detail, two sailors, played by Jack Nicholson and Otis Young, are assigned to escort a timid young seaman (Randy Quaid), to the brig, after he’s convicted of stealing. Quickly taking a liking to the kid, they resolve to show him a good time before he begins serving his sentence. With the charismatic hell-raiser Nicholson leading the way, they wind up getting their prisoner drunk, brawling with a bunch of Marines in a train-station rest room, stumbling into a Buddhist meditation workshop, going to a hippie party, visiting a brothel, and gamely trying to picnic in the snow.

Directed by Hal Ashby, The Last Detail is a classic, one of the most beloved films of cinema’s last real golden age. One of its most notable qualities is the lack of heavy-handedness with which it treats the nation’s involvement in Vietnam. Though the war is raging as the trio make their way up the East Coast, it goes almost unmentioned. Instead, the film lets us get to know its central figures as individuals rather than warfighters — even as the certainty of an eventual deployment looms quietly and ominously over their journey. To the extent that the movie had a political message, it never delivered it outright. It didn’t have to. Released just months after the fall of Saigon, The Last Detail left it to audience members to fill in the context for themselves.

If only Last Flag Flying displayed the same light touch. Missing in action are the original film’s looseness and wit, its delirious sense of cultural freedom, its shaggy iconoclasm, and mostly its subtlety. Instead, the new film veers between false piety and safe cornball humor, patronizing its now-middle-aged trio even as it exploits their service for cheap emotion.

Some three decades after the original trip, the jailed seaman, Doc, remains an oddly childlike figure. Carell is known for playing insecure, wounded men on a mission to reclaim their masculinity, and it’s not hard to see why he might have seemed a good match for an AARP-eligible version of The Last Detail’s meek young sailor. But while Quaid portrayed a teenager, whose coming-of-age was central to the original film, Doc is a grown man who spent a few years in the brig and a few more fighting in Vietnam, so his exaggerated timidity and baleful expression just seems kind of creepy. (The moustache doesn’t help.)

As the film begins, Doc shows up at Sal’s Bar & Grill, in Norfolk, an old dive run by his crusty comrade, former Marine Sgt. Sal Nealon. Played by Breaking Bad’s Bryan Cranston — offering an energetic if hokey imitation of Nicholson’s Oscar-nominated performance — Nealon is the rogue of the trio, the broken-down cynic with a heart of gold. After a night of drinking, Doc takes Sal on a surprise visit to a church, where they find another old pal, Richard Mueller (Laurence Fishburne), now a clergyman.

While Mueller was something of a wildman back in the service, he is now a prissy model of rectitude, endlessly bristling at Sal’s F-bombs. His sanctimonious lectures on profanity will be jarring for anyone familiar with The Last Detail, which was considered a breakthrough at the time for letting its sailors actually curse like sailors (“I am the motherfucking shore patrol, motherfucker!”). Oh well, times sure change.

After some hemming and hawing, Mueller reluctantly agrees to join the mission, and the three pile into Sal’s car for the trip to Arlington, during which Sal and Mueller bicker about the existence of God while Doc gazes forlornly out the window.Arriving at the cemetery gates, Doc realizes his son’s body isn’t there after all. Turns out they’re supposed to go to Dover Air Force Base in Delaware to greet the casket (whoops), so they quickly pile back into the car and hit I-95 North.

Up until this point, the film is mostly innocuous — just the latest example of a well-worn Hollywood sub-genre, the star-studded-old-guy-buddy-movie (see for example Last Vegas, The Bucket List, Going in Style, Space Cowboys, etc.). But once the trio arrives at the massive hangar at Dover and encounters the coffin bearing Doc’s son, the film stumbles haplessly into a political minefield.

After encountering Larry Jr.’s best friend, Lance Cpl. Charlie Washington (J. Quinton Johnson), the trio learns that the official story of Larry Jr.’s death in combat is highly embellished. The truth, it turns out, is considerably less romantic: Tasked with delivering books and other supplies to an Iraqi school, the unit had stopped at a local market. Larry Jr. was buying a few sodas when an insurgent snuck up behind him and shot him in the back of the head. In response, Washington confesses, his buddies massacred everyone in the store. “We went off, lit ‘em all up.”

The film makes a lot of this discrepancy, as if taking a bullet to the head in a war zone is somehow less heroic because the kid didn't see it coming, but the distinction rings false, especially when Doc abruptly decides he doesn’t want to bury his boy at Arlington after all but near their home in New Hampshire. Moreover, he resolves, his son won’t be interred in uniform but in his college graduation gown. “I am not going to bury a Marine,” he says mournfully. “I’m just going to bury my son.”

That’s when the movie finds its villain, Col. Willits (Yul Vazquez), a tough-as-nails Marine officer tasked with greeting the family members of soldiers killed in action. Larry Jr. “died a hero,” he insists, and deserves a hero’s burial at Arlington Cemetery. The two men face off. Doc seizes the flag-draped coffin and tries to wheel it right out of the hangar. Willits grabs the other side and pushes back. Just when the movie threatens to veer into Weekend at Bernie’s territory, the colonel relents.

Which isn’t to say this spurious issue is actually resolved. Following a wacky detour in which the trio rents a U-Haul to transport the coffin and winds up mistaken for Islamic terrorists, the Corps offers to send Larry Jr.’s body on Amtrak, at which point the colonel turns into a full-blown bad guy, insisting on sending Washington along as an escort. If they resist, he threatens, the young Marine will immediately be sent back to Iraq. (Note to Hollywood: Marines don’t usually view engaging the enemy as a bad thing.) Then he pulls Washington aside and orders him to make goddamn sure, against the grieving father’s wishes, that Larry Jr. is buried in his dress blues. “The lance corporal is ours!” he spits, veins bulging in his forehead. “I will not have three over-the-hill veterans pissing on my Corps!” (Note to Hollywood: LOL.)

When I caught an early screening of the film, this scene — a colonel facing off with a fallen soldier’s next of kin over the proper way to honor his memory — struck me as absurdly far-fetched. But that was before the deeply disturbing real-life spectacle that unfolded last week, when President Donald Trump belatedly attempted to offer his condolences to the wife of Army Sgt. La David Johnson, who died in the Niger ambush, wound up offending her instead, and then, instead of simply apologizing to the soldier’s grieving widow, turned it into a weeklong controversy, pulling in Gen. John Kelly for good measure.

Sad to say it, but maybe a parent and a senior military figure squaring off over a dead soldier isn’t so fanciful after all. Actually, no, I take that back — it's totally insane.

Anyway, back to the movie: On the way to New Hampshire, a bunch more things happen, none of which have any real impact on the storyline. There’s an off-key scene in which Doc expresses sympathy for Saddam Hussein, who was, after all, a grieving father just like him (“I lost one,” Doc dolefully. “He lost two.”) A stop in New York City to marvel at those amazing new devices, mobile phones. A few missed trains. A giggly heart-to-heart about erections. Embarrassing reminiscences about virginity and whorehouses.

Perhaps inevitably, the trio also finds time to grapple with lingering guilt over their own wartime trauma, recalling the horror of watching a battle buddy who died writhing in pain because there was no morphine left. It turns out they’d taken it all.

In other words, if you thought a Hollywood film might portray Vietnam veterans as normal people instead of tormented products of America’s shameful military folly … nah. Not really.

Last Flag Flying isn’t just a bad movie, it’s deeply dishonest as well. It seeks to redeem the valor of Vietnam-era veterans while simultaneously patronizing them as damaged if adorable old fogeys. It winks at the raucous irreverence of its classic 1970s predecessor while betraying its spirit. It claims to honor the sacrifice of a fallen Marine while actually using his loss to mount a simple-minded critique of U.S. foreign policy and demonize the military for wanting to memorialize one of their own.