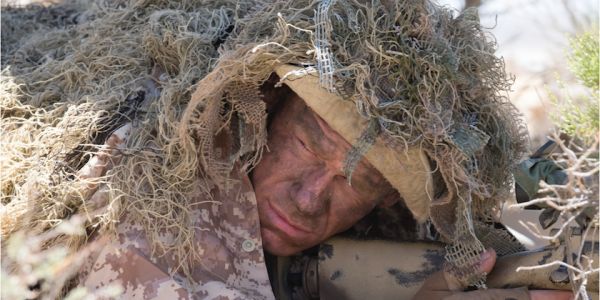 John Cena told Task & Purpose in a recent interview that former Army Ranger Nicholas “The Reaper” Irving played a big role on the set of his upcoming film “The Wall.”

“Having Irving on set really helped make sure that we were tactically in place do we didn’t do injustice to our service men and woman,” Cena said.

Irving served as a direct-action sniper with the 3rd Ranger Battalion for most of his Army career, from 2004 to 2009. He deployed multiple times to Iraq and Afghanistan, and ultimately racked up enough kills (33) to earn him his famous nickname. He’s written two books about his experiences at war, “The Reaper,” and “Way of the Reaper.” NBC is currently developing a miniseries based on his battlefield exploits.

In “The Wall,” which was directed by Doug Liman (“The Bourne Identity”) and debuts in theaters nationwide on May 12, Cena and Aaron Taylor-Johnson (“Kick Ass”) play two Army Ranger snipers who find themselves in a tense standoff with an enemy sniper. Set in Iraq in 2007, the duo has been dispatched on a mission into the desert to investigate the killing of a group of contractors. All of them have been shot, more or less, in the head. The culprit may or may not be the deadliest sniper in Iraq — and whoever he is, he’s still there. Cena finds that out first the hard way.

Cena had previously worked with Irving on the set of the reality competition television series “American Grit, ” and he says that Irving’s contributions to the film weren’t limited to tactics: His presence on the set also ensured that the military lingo and mannerisms deployed throughout the film are as realistic as possible.

“Nick helped a whole hell of a lot on that,” Cena told Task & Purpose. “I know that Aaron studied his ass off as far as consuming knowledge relevant to the script and also learning all of the acronyms and the slang. And then me, having hung around that element a bit, I could easily go back and forth.”

As for weapons training, Cena says he’s had the privilege of training with elite soldiers in the past.

“I’ve been lucky over the course of my career to be in some pretty wonderful situations with some high-skilled tacticians, and I’ve been able to go through some skills training and some range training with the U.S. military’s finest.”

“Nick is always asking me to come down to shoot,” he added. “The problem is time. Time is my greatest luxury, and it also seems to slip away from me the fastest.”

You can read the full interview with John Cena here.