Mankind Goes To War In New Planet Of The Apes Movie

Mankind is so screwed. That’s the easiest way to sum up the new trailer for “War of the Planet of... 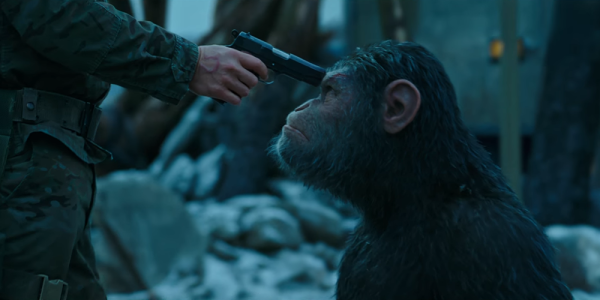 Mankind is so screwed.

That’s the easiest way to sum up the new trailer for “War of the Planet of the Apes,” the third chapter in a franchise about a race of genetically modified primates who eventually overpower mankind, and enslave the remaining survivors.

The most recent films are prequels to the 1968 classic “Planet of the Apes,” and take place years before the apocalyptic events, that led to humanity’s demise.

But the end is nigh and mankind’s time is up.

With most humans killed by the same virus that granted primates increased intelligence, one man, dubbed the “Colonel” and played by a bald and jacked Woody Harrelson, is on a collision course with Caesar, the leader of the apes. In the trailer, the Colonel leads his men on an incursion into Caesar's territory, where, presumably, the humans violate some kind of truce. Afterward, Caesar and his cadre of gorillas, chimps, and at least one orangutan ride out to rally their simian allies and prepare for war.

“War for the Planet of the Apes” is scheduled to hit theaters July 14, 2017, but, in the meantime, check out the trailer below.