The Most Badass Marines In Science Fiction

Yes, Space Marines. And why not? As more and more ofscience fiction becomes science fact, why wouldn't the Marine Corps... 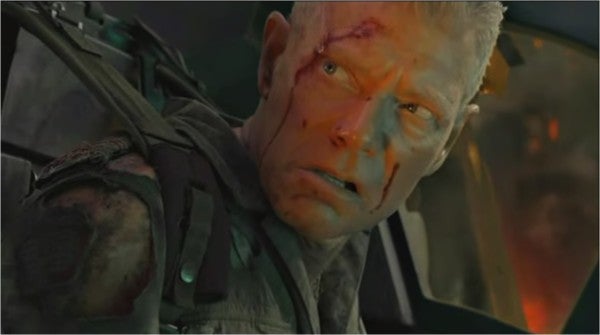 Yes, Space Marines. And why not? As more and more of
science fiction becomes science fact, why wouldn't the Marine Corps make the leap to space? Marines have always supported our nation's Navy, and in some militaristic future, orbital fleets will still need Marines, the same way naval fleets do. Except these devil dogs won't be storming beaches, but moons.

Military brass can give it an official sounding title like: Orbital Combat Operations Command, or the O-COC, which fits perfectly, because every Marine like a good dick joke, especially those that are acronym based.

Science fiction films have expanded upon military archetypes, like the grizzled veteran, or the fearless point man, and helped transform the phrase “space Marine” into a prestigious moniker.

These are a few science fiction Marines who have the prestigious and utterly fictitious responsibility of patrolling outer space.

You won't find a better example of “space Marines” than Cpl. Hicks (Michael Biehn) and Pvt. Hudson (Bill Paxton), seriously — they're part of the United States Colonial Marine Corps, which, surprise, operates in space some time in or around the 22nd century. But that's not what makes them top picks. It's because every Marine Corps, from the Stone Age to the Space Age, will have a Hudson and a Hicks.

In Hudson, we have the belligerent terminal private, with too much time in, and zero fucks remaining. Seriously who hasn't wanted to answer the question, “Any saved rounds?” with “Yeah, how do I get outta this chicken shit outfit?” Especially on the lieutenant's first day. Then we have Hicks, the quintessential, “been there, done that, bought the t-shirt” kind of guy. He's so salty and hard he falls asleep on the way to the drop site, and he doesn't bat an eye at the idea of nuking a planet from orbit.

I mean, it's the only way to be sure, right?

In the movie “Avatar,” Col. Quaritch, the Marine commander and principal villain says, “You are not in Kansas anymore. You are on Pandora, ladies and gentlemen. Respect that fact every second of every day. If there is a hell, you might wanna go there for some R & R after a tour on Pandora.”

Sound a little familiar? Maybe if you replace Pandora with a country in Middle East? Quaritch (Stephen Lang) is a mean, tough son of a bitch, which makes him the iconic lifer — from the screaming eagle high and tight, to the way he (and every other senior Marine) talks as if stuck in the 1950s. Not to mention the fact that the guy's built like a truck, drives a giant metal robot that he uses to crush blue, cat-like humanoids called the Na'Vi.

And of course he is rarely seen without his coffee mug, even during combat — think about your old operations officer, master guns or battalion gunner — yeah, the resemblance is uncanny.

When Staff Sgt. Nantz (Aaron Eckhart) calmly walks away from the burning wreckage of an alien drone, the new lieutenant shows off that college intellect by pointing out something we already knew — that Nantz “does some real John Wayne shit.”

Arguably, the 20-year staff sergeant thing is a bit of stretch. Maybe if he was a gunnery sergeant, but I get the impression that rank is less well known among civilians compared to staff sergeant.

But, enough about faux pas and plot holes, let's talk about modern-day Marines killing H2O-stealing space invaders. Hydrate or die, right? Though not technically space Marines, pushing back an alien invasion force with nothing more than a fire team (by the movie's end) has to count for something.

The Roughnecks in “Starship Troopers”

Roughnecks, enough said. They may not be much for tactics, the dialogue is awful, and the movie makes a mockery of the book; however, they are legitimate space Marines and here's why.

They're partnered with the Fleet, which is essentially a giant orbital Navy. They provide security aboard the ships and are used to conduct large-scale assaults on hostile planets, creating a beachhead from which to launch future attacks. That and their “attack and only attack mentality” is certainly a qualifier. I mean, consider the initial invasion of planet Klendathu?

When asked what to do, Johnny Rico (Casper Van Dien) responds with, “Kill them! Kill them ALL!” Not the most elaborate strategy — but hell, if it works…