The story of Medal of Honor recipient Henry Jonson is now a graphic novel. 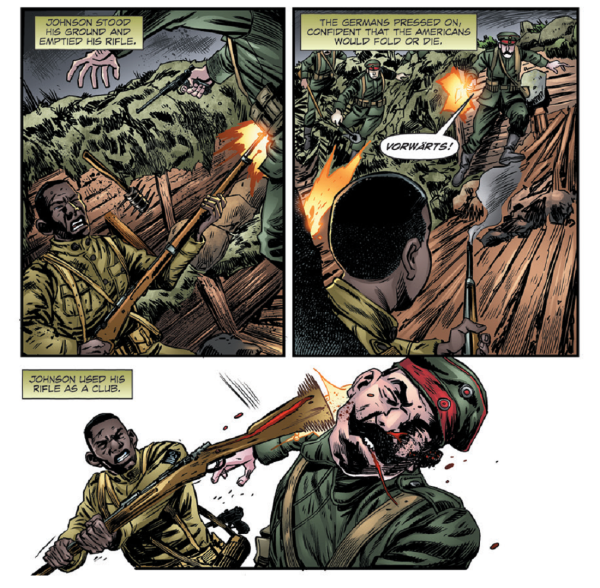 The nonprofit Association of the United States Army (AUSA) continues its series of graphic novels honoring Medal of Honor recipients with “Medal of Honor: Henry Johnson,” available now as a free download at www.ausa.org/johnson.

Henry Johnson served in World War I as a member of the 369th Regiment, the African American unit that was later called the Harlem Hellfighters. While on sentry duty on the Western Front, Johnson fought off a German raiding party in hand-to-hand combat despite suffering serious injuries.

Johnson became the first American to receive France’s Croix de Guerre with a golden palm. After the war, he toured the country giving speeches until the Army threatened to prosecute him for appearing in his uniform after leaving service. He died at age 36 in 1929.

Historians and other veterans campaigned for Johnson in the decades after his death. He was awarded a Purple Heart by President Clinton in 1996, a Distinguished Service Cross in 2003 and, finally, a Medal of Honor in 2015 by President Obama.

Series one of AUSA's Medal of Honor graphic novels is available for download or to read online at www.ausa.org/moh. The four titles include books that tell the stories of Alvin York, Roy Benavidez, Audie Murphy and Sal Giunta.

A previous novel in the series two honored Sen. Daniel Inouye. Future novels in the second series will highlight Dr. Mary Walker, a Civil War surgeon and the only woman to receive the Medal of Honor; and Cpl. Tibor Rubin, the Holocaust survivor who later fought in Korea.