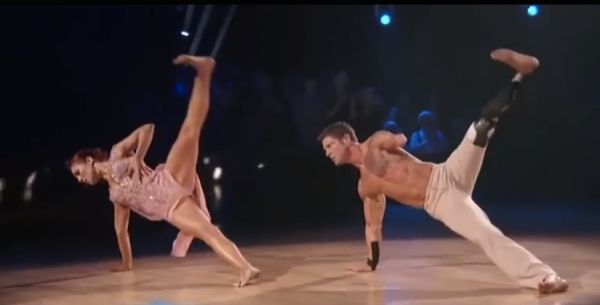 In the darkness of the night Dec. 19, 2005, the 24-year-old 101st Airborne Division soldier from Alabama drove his humvee into a trip wire planted by insurgents. It ignited two 155 mm artillery shells shrouded in tumbleweed, according to Tom Gordon of The Birmingham News, who reported about the incident in March 2006. The humvee was thrown into a roadside canal, but the other drivers in his convoy never stopped, mistakenly believing Galloway had driven past the bomb.

With his wounded leg trapped under the seat, Galloway wasn’t rescued until another convoy stopped at the canal after hearing a radio report about the bomb blast. Galloway was evacuated on a helicopter, but medics didn’t expect him to live much longer.“Noah’s injuries were catastrophic,” said Maj. Dennison Segui, a first responder at the scene, in a video that aired recently on ABC’s Dancing with the Stars. “We didn’t think he was going to make it.”

When Galloway woke up several days later on Christmas, his mother explained to him at his hospital bedside that he had lost his left arm above the elbow and left leg above the knee. “We would walk out of the room and cry because I would think of the things that he might not be able to do because he was missing his arm and his leg,” said Noah’s sister Jennifer in the Dancing with the Stars video.

Weeks after the incident while in an elevator at Walter Reed National Military Medical Center, Galloway met one of the soldiers who had helped save his life by the Iraqi canal. The soldier, who had also left Iraq after suffering his own IED wound, apologized that Galloway hadn’t received more timely medical care in the moments after the Dec. 19 explosion. “Don’t be sorry,” Galloway replied then, according to Gordon’s report. “I’m alive. I’m doing great.”

But that wasn’t completely true. As he gradually recovered him his physical injuries, Galloway found it more difficult to overcome the mental anguish of suddenly losing the career and physical lifestyle that he loved. The more he tried to suppress his lingering anger, the more it held him back from moving on with his life.

“It really depressed me,” Galloway told Dancing with the Stars. “I portrayed this image to everyone around me that I wasn’t affected by it, and I buried it all and I got to where I would just sit at home by myself and drink to try to cope with it by myself. It was the biggest mistake I ever made.”

Eventually, Galloway took a hard look at himself in the mirror and realized he had to stop dwelling on his injuries and look ahead to the rest of his life and his three growing children. He hit the gym to get back in shape and didn’t stop. Today, he’s a personal trainer, motivational speaker, and a regular competitor of road races and grueling Tough Mudder and Spartan obstacle races, according to his Dancing with the Stars online biography. He has also created the No Excuses Charitable Fund, which raises money and awareness for organizations that help veterans.

Watch Noah Galloway perform a contemporary dance routine On Dancing with the Stars with his partner, Sharna Burgess. Story continues below.

“Once I accepted my injury, got back in the gym, and started living a healthier life, everything picked up,” Galloway told DWTS viewers. “It’s like I had to be injured, I had to go through that dark time to get where I am today.”

While three of the show’s 12 celebrity contestants, each partnered with a professional dancer, have already been voted off after four weeks, Galloway doesn’t appear to be going anywhere anytime soon. His performances have left audiences cheering and teary-eyed judges extolling his strength and moves.

“You really are the ultimate role model,” exclaimed judge Len Goodman in the most recent episode, which aired Monday, Apr. 6.

“You want a super hero? There it is,” Goodman told an approving and thankful audience.