Last summer, German film director Roland Emmerich toured a number of sites around Pearl Harbor as he prepared to remake... 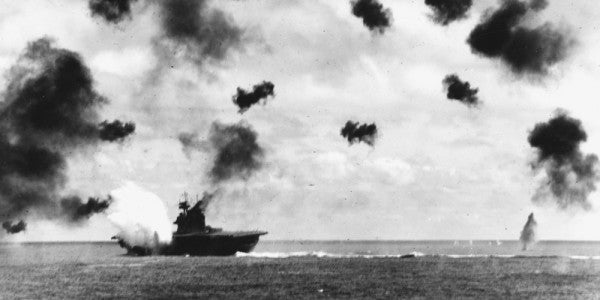 Last summer, German film director Roland Emmerich toured a number of sites around Pearl Harbor as he prepared to remake the action epic Midway about the 1942 battle that turned the tide of World War II in the Pacific against the Japanese.

Filming is expected to start early next month at Joint Base Pearl Harbor-Hickam on the nearly $100 million film, and reuse already has begun for the remake.

Crews are working on interior spruce-up and exterior landscaping at the same home that was used for filming of the 2015 movie “Aloha” with Bradley Cooper and Emma Stone, the Navy said.

The home, part of a group of Craftsman-style single-story units built around 1916, are no longer used by the Air Force.

The new “Midway” — a remake of the 1976 version starring, among others, Henry Fonda — this time will have Woody Harrelson in the role of Adm. Chester Nimitz, according to the Hollywood Reporter.

Mandy Moore, Luke Evans and Patrick Wilson are also part of the cast, according to entertainment media. Wilson is expected to play Pearl Harbor intelligence officer Edwin Layton, who predicted when the Japanese would be in the vicinity of Midway Atoll on June 4, 1942.

Emmerich, who’s been part of “Independence Day” and “The Day After Tomorrow,” also viewed the exterior of Building 1 at Pearl Harbor, which was key to the United States’ victory at Midway.

Unknown to Japan, Station HYPO Navy code-breakers working in a windowless basement nicknamed the “dungeon” at Building 1 had cracked a portion of the Japanese Navy’s JN-25(b) code.

That knowledge allowed Pacific Fleet boss Nimitz to send all his available carriers to ambush the Japanese.

Author Craig Symonds said in his book “The Battle of Midway” that “there are few moments in American history in which the course of events tipped so suddenly and so dramatically as it did on June 4, 1942.”

The Pearl Harbor shipyard also had a key role. Eight days before the battle, Yorktown had limped into the Navy Yard after sustaining damage in the Battle of the Coral Sea a month earlier.

In 72 hours, 1,400 shipyard workers restored the Yorktown to a battle-ready state, the Navy said.

Emmerich and his crew toured different parts of the joint Navy and Air Force base several times, with the Navy noting “they really are dead-set on making sure it’s a historically accurate (film).”

Among other spots visited were the old seaplane ramps on Ford Island, the submarine Bowfin and Quick Field at Pearl Harbor, according to the Navy.

Late last month, the joint base put out a casting notice for military members and their families who wanted to be extras in “Midway.”

A request was made for military spouses and children, fluent Japanese-speaking males and Asian adults and children over the age of 6. The Navy said 1,400 to 1,500 people applied.

Burl Burlingame, historian at Pacific Aviation Museum Pearl Harbor on Ford Island, said he helped provide the tour for Emmerich last summer, and when the script came up, “he said there’s not a lot for Hawaii.”

Filming also is expected to take place in Canada.

“I’ve gotten calls from Canada from people working on the effects with some very, very, very, very basic questions” about the U.S. military in World War II, Burlingame said.

Georja Skinner, who is with the state Department of Business, Economic Development and Tourism and oversees the operations of the Hawaii Film Office, said the “Midway” production company “is still finalizing a lot of (filming) locations” in the isles, and offices will be set up shortly.

“We love it when someone like a Roland Emmerich comes to Hawaii,” she said. “He’s such a noted person in the film community and with his previous projects, to have this under his watch bodes well for those type of big idea projects coming to the state.”

Hundreds of people are expected to be employed in connection with the film through September.

Skinner said the state is on track for one of the biggest production years “in quite some time.”

“We’re looking at maybe just north of $300 million this year in film and television production, and that’s a very high number,” she said.

That figure could go even higher.

“With this (‘Midway’) project, and we know two other features (films) that are en route to Hawaii, along with ‘Magnum P.I.’ and ‘Hawaii Five-0,’ Hawaii is experiencing a very strong production year,” Skinner said.