New Call Of Duty Game In A Nutshell: ‘Screw It, Let’s Go To Space’

Tired of dramatic doom and gloom news and a seemingly endless cycle of Twitter fights and post-debate coverage? You’re not... 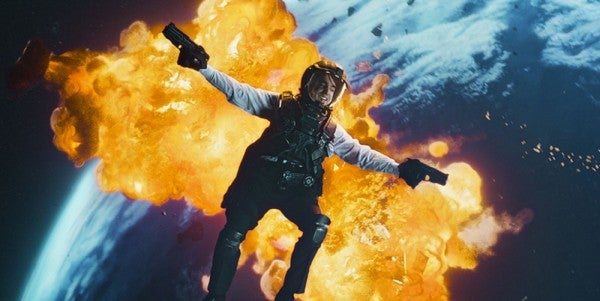 Tired of dramatic doom and gloom news and a seemingly endless cycle of Twitter fights and post-debate coverage? You’re not alone, and there’s an escape.

A new live-action trailer for the game begins with people becoming fed up with the day-to-day grind. Aptly titled “Screw It, Let’s Go To Space” that’s exactly what they do, and over-the-top carnage ensues. The Oct. 25 trailer even features Olympic gold medalist Michael Phelps, who takes a moment to stretch before jumping into the fray, only to have comedian Danny McBride steal his kill.

“Boom! This is my pool, sea monkey,” hoots McBride in the trailer.

Set in the future, the game centers around an interplanetary civil war between the inhabitants of earth, and a rebel faction fighting over the earth’s solar system. While many first-person shooters take realism as a point of pride, the newest Call of Duty game has thrown it out the window, and it seems to be working for them.

I mean, who doesn’t want to pilot a spaceship that closely resembles an F-35 (I guess it’s finally ready) in a heated dog-fight, bail-out, then land on a space station and blast enemies into oblivion with insane weapons?

Now, at least the franchise has a justification for unrealistic in-game physics since it takes place, at least partially, in the cold vacuum of space.

“Call of Duty: Infinite Warfare” is set to release on Nov. 4, but in the meantime, check out the trailer below.