In my two deployments as an infantryman to Iraq, I never had the honor of working in close proximity with … Continued 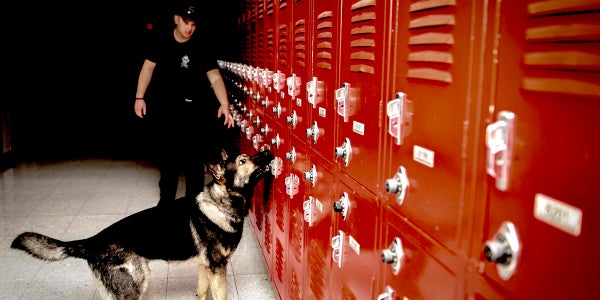 In my two deployments as an infantryman to Iraq, I never had the honor of working in close proximity with a dog. There were street dogs galore in Baghdad, of course. And I’d occasionally see working dogs and their handlers stroll by on larger bases. But I never had the pleasure of actually going out on mission with one of them, to my lasting dismay.

That’s why I was so eager to get my hands on “War Hawk,” which was released April 19,by James Rollins and Grant Blackwood.

Rollins is a No. 1 New York Timesbestselling author best known for his Sigma series. He’s known for incorporating “ripped from the headlines”-type plot points into his work and then using the story to explore their implications. He’s also worked for decades as a veterinarian. Blackwood is a sort of professional session man who has collaborated with heavyweights like Clive Cussler and Tom Clancy. He’s also a Navy veteran who spent time as an operations specialist and pilot rescue swimmer. He brings military acumen to the table. It’s fitting that this book was the result of successful collaboration, since “War Hawk”is a story about collaboration at its most fundamental level.

Related: One of the best books about the Iraq War is now a movie »

The thriller is the second book in a Sigma Force spin-off series, which centers around the taciturn yet tender former Army Ranger Tucker Wayne and his Belgian Malinois, Kane. Wayne and Kane unravel a mystery that involves Pruitt Kellerman, the ruthless CEO of a mega media corporation, using secret World War II-era research that originated with Alan Turing to program an army of autonomous drones. Wayner, Kane, and group of intelligence analysts are in a race against the clock to put a stop to Kellerman and his nefarious plan: a race that zig zags across the globe, from Serbia to Alabama to New Mexico to Trinidad. In other words, take your Dramamine before you settle in to read this thriller, because it’s quite a trip.

“War Hawk” is a fairly straightforward romp, so it seems easy to say that the authors wanted to write a book that is a pulse-raising thriller that incorporates and explains contemporary combat/intelligence issues in a compelling way.

Did they pull it off? Yes. A thousand times, yes. I was a bit skeptical going in that a book so simple in appearances would be able to tackle such a complex issue as autonomous weapons and working dogs, but it does. And it does so without missing a beat.

There are two other reasons the book succeeds. The first is that Rollins does a really good job of writing about war dogs. He gets the nitty gritty details down, conveys the sense that Kane is a hardworking hero, without ever actually anthropomorphizing him. That probably partially comes from his experience as a veterinarian, but it also comes from the copious research he did for the book. As Rollins explains in the publicity that came with the book: “To do this pair [Tucker and Kane] justice, I visited Lackland Air Force Base where war dogs are raised and trained. While in Baghdad, I also met a fellow veterinary school classmate who was with the U.S. Veterinary Corp. He was able to give me great insight into the technology, the psychology, even the aftermath of such a unique fighting team: from the Kevlar-reinforced K9 Storm tactical vest worn by the dogs to their amazing communication gear that allows handlers to see through their dogs’ eyes. I also learned about how PTSD afflicts not only the soldier but also the dog, and how efforts are being done to combat and treat both sufferers.”

The second reason the book succeeds is Blackwood. The author has written with Clancy, and something this book has in common with those is that its realism doesn’t extend to the messiness of life as it’s actually lived. That might sound like a criticism, but it isn’t. Writing like this, using drama and topical subjects in a sort of double-helix twist, needs a sort of sterile lab setting in order to work well. You want it to be like field manuals have come to life and are being acted out.

While the plot is excellent, the writing itself isn’t necessarily the point of a project like this, except to act as a sort of unobstructed conduit through which adrenaline and military facts can flow. But when the clichés are hitting hard and heavy, stuff like using some variation of “stirring his depths” more than once in the same paragraph, it’s super distracting. As the saying goes, “avoid clichés like the plague.”

And this is just a minor point, but a global finance villain would have been more believable than a media mogul. Just saying.

The book ends with a short section on the truth behind the complex subjects handled in the story: military war dogs and their handlers, post-traumatic stress disorder, Alan Turing, drones and autonomous weapons, information wars, and corporations playing a role in war. This is the heart of “War Hawk,” relaying these very important and topical issues in a thrilling way. As I was reading, I kept putting the book down to excitedly tell my girlfriend what I was learning, such as,“Did you know that war dogs know over 1,000 verbal commands?” And I felt like I learned something new in each chapter.

For reasons I can’t remember, I stopped reading action thrillers when I separated from the Army six years ago. “War Hawk” was a reminder of what a mistake that was. I won’t make it again. I’m definitely reading the next Tucker Wayne novel.