Fans of movies about the Global War on Terror are in luck. At least five big-budget war films set in... 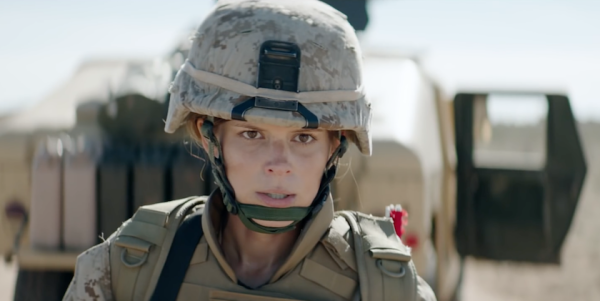 Fans of movies about the Global War on Terror are in luck. At least five big-budget war films set in either Iraq or Afghanistan (or, in the case of “Mine,” some nondescript desert in the Middle East) will premiere in the U.S. in the next several months. But only one, “Megan Leavey,” features a female lead — and it’s the only one that shares a name with a real-life service member.

Cpl. Megan Leavey, a Marine dog handler, was deployed twice to Iraq with the same military working dog, a bomb-sniffing German Shepherd named Sgt. Rex. During the duo’s second deployment, to Ramadi in 2006, both Leavey and Rex were wounded by an IED.

But the drama didn’t end there. After Leavey left the Corps in 2008, she spent the next several years fighting to adopt Rex. The Corps resisted — asserting that, despite his injuries, Rex was still fit to remain in the military — and it wasn’t until 2012, after Leavey convinced Sen. Chuck Schumer of New York to intervene on her behalf, that the duo was finally reunited. Rex died of facial palsy that same year.

Leavey is played by the talented Kate Mara of “House of Cards” fame, but the film’s biggest draw will surely be its central theme: the fierce bond that military dog handlers develop with their K9s. In recent years, the country’s heard several other stories of handlers fighting to reunite with the dogs they went to war with. Not all of them won that fight, but Leavey’s campaign to adopt Rex paved the way for the passage of a 2016 bill that mandates handlers be given first rights of adoption after their dog partners retire from service. To many people, Leavey is a hero both on and off the battlefield — and there are plenty of dogs who’d probably agree.

Check out the trailer for the film, which premieres in June: