This New Sport Is ‘Game Of Thrones’ In Real Life

Picture yourself on Sundays night at 9 pm. If you’re anything like me and it’s April, May, or June, you’re … Continued 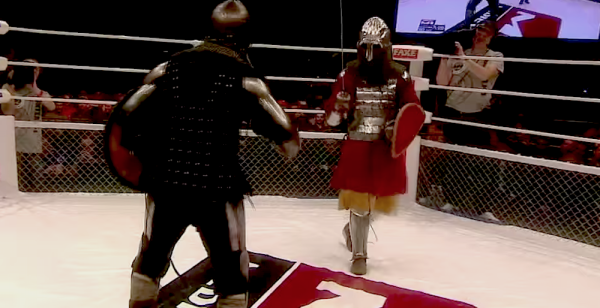 Picture yourself on Sundays night at 9 pm. If you’re anything like me and it’s April, May, or June, you’re probably sprawled out on your couch using your chest as a plate for popcorn while you watch people murder each other for sport on HBO’s “Game of Thrones.” While you’re laying there, do you ever wish you could be there, in the midst of a bloodbath, wielding your sword, slaying a bastard who stole your home? Because I do.

And apparently I’m not the only one. A renewed interest in knight fighting has brought about a sport that combines the raw power of Mixed Martial Arts and the excitement of “Game of Thrones” in a savage style of fighting known as M-1 Medieval MMA.

The style emerged in St. Petersburg, Russia, but it has since expanded throughout the country. And the matches have accordingly been dubbed “knight fight nights,” which draw in big audiences who cheer for the knights they love, and boo the ones they hate.

According to the Telegraph UK, “This brutal twist on an already dangerous sport clearly shows that audiences have developed a taste for shield-wielding pugilists.”

Of course, it’s not like you’re traveling to Westeros. But you can dress up in your best tights and kilts and wield a sword while you beat the crap out your opponent in a one-on-one match in a wrestling ring in front of hundreds of people.