If there were ever a good time to be British it would have been on Nov. 11, the 100th anniversary … Continued 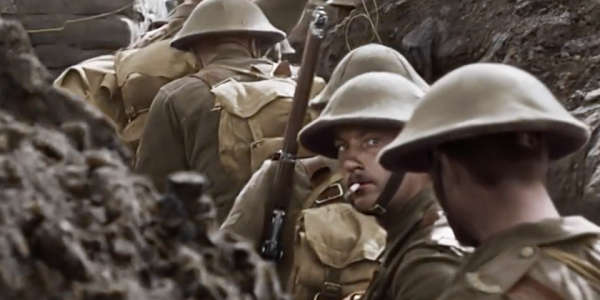 If there were ever a good time to be British it would have been on Nov. 11, the 100th anniversary of Armistice Day, when BBC Two premiered Peter Jackson's highly anticipated World War I documentary They Shall Not Grow Old.

As for those of us stuck on this side of the pond, we still have a few more weeks to go before we too can watch the film, which debuted in the U.K. to rave reviews. The Guardian's Peter Bradshaw gave it five out of five stars, writing, “The soldiers are returned to an eerie, hyperreal kind of life in front of our eyes, like ghosts or figures summoned up in a seance.”

Set to hit U.S. theaters on Dec. 17 and Dec. 27, They Shall Not Grow Old is the culmination of a four-year project commissioned by the Imperial War Museum in partnership with the BBC. Jackson and his team distilled 600 hours of grainy black and white footage into a 99-minute documentary, using state-of-the-art technology to add depth and colors. As Bradshaw notes, Jackson also “used lip-readers to help dub in what the men are actually saying.”

Warner Bros. released a 47-second trailer for the film last month. At nearly three times as long, the new trailer provides a better look at the sheer breadth of the project. See for yourself: