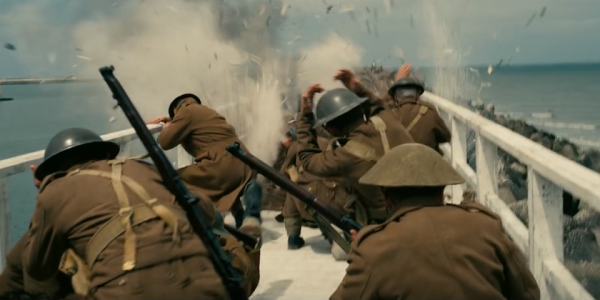 Warner Bros. has just dropped the third trailer for writer-director Christopher Nolan’s highly anticipated upcoming WWII epic “Dunkirk” and all signs point to yes, this is going to be one hell of a film.

Starring Tom Hardy and Cillian Murphy, both alumni of Nolan’s “The Dark Knight” trilogy, the film centers on one of the most harrowing events of the Second World War — the 1940 operation to rescue nearly 400,000 Allied troops surrounded and outnumbered by German forces on the beaches and harbor of Dunkirk, France.

In the trailer, we see Allied troops being bombarded by enemy aircraft, a dogfighting Tom Hardy, and British civilians embarking across the English Channel en route to Dunkirk to assist with the evacuation.

During the real-life evacuation, called Operation Dynamo, a fleet of approximately 933 boats, including many piloted by civilians on their own initiative, helped bring back a total of 338,226 troops back across the channel. Tens of thousands of Allied soldiers were killed or captured during the battle and retreat.

“At its heart it’s a survival story,” Nolan said at a film convention in March. “The enemy is closing in on the British on this beach with no escape…They were faced with the choice between surrender and annihilation.”