When It Comes To The Military, SciFi Movies Are Missing The Mark

Everyone likes watching an epic sci-fi battle. But whether it’s Star Trek’s Federation versus the Borg, Battlestar Galactica versus the... 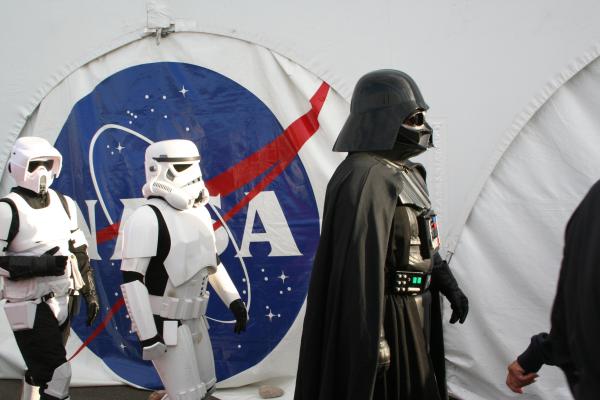 Everyone likes watching an epic sci-fi battle. But whether it’s Star Trek’s Federation versus the Borg, Battlestar Galactica versus the Cylons, or the Rebel Alliance versus the Empire, most veterans are left wondering, “It’s like a thousand years in the future. Why are they fighting like it’s the Bronze Age or something?”

One might think that these futuristic battles are just idle fun, and in a way they are. They allow us to fantasize about the way we wish war was — straightforward battles between good and evil, and not the inhuman, horrific spectacle as it actually is. Nonetheless, they shape the way the public looks at war today. Pop culture shapes the subconscious, which shapes public consciousness. Public “knowledge” of war comes in more ways than we realize. Most of the biggest onscreen battles in recent years have been science fiction. More often than not, they ignore military innovation, real warfare strategy, and the grim reality of loss of life in battle.

The last manned fighter planes that will ever be produced are being manufactured right now. Even with that, pilots in Battlestar Galactica and Star Wars are still dueling at short range as though it was World War II. Larger spaceships (I’m looking at you, Millenium Falcon) even have bubble turrets, with gunners swivelling around like on a B-17.

Today’s fighters push the gravitational limits of the human body, even though they usually travel at subsonic speeds on somewhat predictable paths. In fictional space battles, pilots travel much faster, while twisting in multiple axes, which would make any meat sack pass out and die, whether they’re the male Starbuck or the much more popular female version.

Even today, most aerial engagements occur at the edge of visual range, but if you look at sci-fi battles, the pilots are close enough to flip the bird at their opponents.

The big starships are even worse, though. They face off like sailing ships of the 18th century, harkening back to days of yore. Star Trek often has starships facing each other at close range, making everyone think, “That Admiral Nelson was really on to something with those sailing ships and broadside cannon battles!” While Star Trek is the archetype, Battlestar Galactica and Star Wars also feature ships facing off like the British against the French at Trafalgar. After travelling billions of miles and using entire solar systems as their battlegrounds, they fight to the death at ranges of a few feet. Even ramming other ships, a tactic not used widely since the Age of Sail, is a prime feature of Star Trek: The Next Generation, the 2009 Star Trek film, Babylon 5, and Stargate: SG-1.

When spaceships attack those on the ground, they strafe with cannons. In The Avengers, The Empire Strikes Back, Star Wars, the original Battlestar Galactica, Star Trek, Firefly, and others, they travel across the galaxy or between dimensions in advanced spaceships. Then they send those sophisticated craft down to the surface to shoot at individual people with what are basically machine guns. Strafing is used today, but it’s used to reduce collateral damage; the exact opposite of what these aliens want to do. If you want to kill everyone, you use something else, like hydrogen bombs — something we already have. If your goal is to wipe out a civilization in one fell swoop, gunning down civilians one at a time is going to take a while.

On the ground, troops in the year 3099 still fight like it’s 1899. In Starship Troopers, Dune, and most notably, every single Star Wars movie, the human wave rules the battlefield. If it weren’t for all the aliens running around, it would look like the Battle of Gettysburg. When weaponry was less advanced, this was a pretty good idea. A bow or a muzzleloader takes a while to get ready, and as the Westerns say, “You can’t shoot us all.” In 1914, the world figured out quickly that machine guns had rendered that tactic obsolete. Actually, it took about four years of horror in the trenches, but eventually they got it right.

With anything better than a musket on the other side, rushing into battle shoulder-to-shoulder is just a very orderly means of committing mass suicide. Why are wookiee soldiers fighting the Sith's clone troops with crossbows when they could easily be bombed by any of the dozens of aircraft flying around or mowed down by the troops defending from prepared positions? Why are the mobile infantry of Starship Troopers executing frontal assaults against the “bugs” when the enemy was decimating dozens of spaceships in orbit just a few minutes earlier? Battles for distant planets look like the Battle of the Somme, if the Germans had lasers, couldn’t hit anything, and France was the size of a phone booth.

General David Petraeus didn't personally kill Osama bin Laden. Why does “General” Han Solo lead a squad to take out the shield generator? His friends Admiral Akbar and General Calrissian, along with the rest of the rebel command structure, are above, fighting in a short-range gun battle with Imperial Star Destroyers. Captains Kirk and Picard on Star Trek are one-man SEAL teams fighting the enemy whenever they decide to take a break from their real jobs commanding starships, even though they have crews of literally several hundred other people better suited to fighting than the ship's captain.

And while we’re talking about it, what’s going on with space invasions? The last opposed beach landing was at Inchon, over 60 years ago. Even that site was picked to avoid the heart of enemy defenses. Amphibious assaults in World War II were successful, but at a huge price. Helicopter tactics have changed to avoid hot landing zones. With most helicopters running over $20 million a pop, they aren’t thrown out lightly. The same is true for amphibious ships. Who knows how much a spaceship costs?

You wouldn’t know by looking at Starship Troopers, Avatar, or Star Wars: Episode II. They drop in from space in fragile, helicopter-type vehicles, directly into the enemy defenses. They can literally land anywhere else on the planet, but they choose to land right in front of enemy laser cannon.

Amphibious landings aren’t that common in science fiction, probably because space isn’t known for beaches, but in Star Wars: Episode III, wookiees attack the beaches like a hairy version of Saving Private Ryan. They may look like dirty hippies, but we know they can fly — Chewbacca is Han Solo’s co-pilot, for crying out loud. Why do they drive slow moving watercraft directly onto an enemy beach instead of landing, well, anywhere else on the entire planet?

And those troops, waving their rifles around, what about them? Looked at any pictures of Marines and soldiers in Afghanistan lately? You might have noticed that every single one of them had a scope on the top of his rifle. If you looked at similar footage of troops in Vietnam, or even Desert Storm, you'd have seen only a few, usually with snipers or other special troops. One of the biggest changes in war over the past decade has been the near-universal adoption of combat optics.

So why is everyone in every sci-fi movie, just waving his laser rifle around, not even aiming his weapon? In Star Wars, Star Trek, Aliens, Starship Troopers, well, let's just say all of them — no one has a scope. Hell, if they even have old-fashioned iron sights, they aren't even using them. Might explain why those Stormtroopers can't hit anything.

Probably the biggest disservice though, is portraying death as completely cost free, both to the attacker and the attacked. Princess Leia personally witnessed the destruction of her entire planet — something that could be considered the Holocaust, the Mongol invasion, and Stalin’s purges put together and multiplied by a thousand — yet is nonchalantly kissing her brother on Hoth a few weeks later. Luke single handedly took out a small planet’s worth of Imperials on the Death Star. Sure, he probably feels justified in killing the Stormtroopers, but even he has to feel a twinge of guilt having wasted probably hundreds of innocent space janitors along with them.

The day Luke Skywalker is shown talking in a veterans advocacy group about the trauma of losing his arm fighting his own father in hand-to-hand combat, maybe that will be the day we know the public has finally abandoned the illusion that war is painless … or glorious.