For the first time in a century, World War I can be seen, and heard, the way it was for... 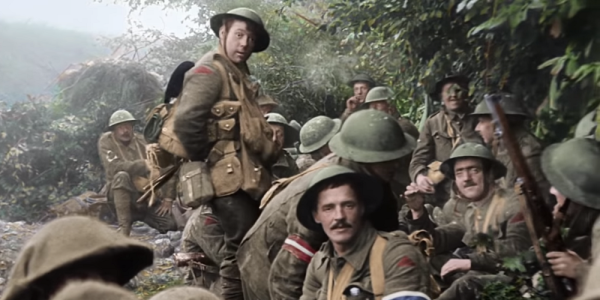 For the first time in a century, World War I can be seen, and heard, the way it was for those who waged it.

To commemorate the 100th anniversary of the First World War, Academy Award-winning director Peter Jackson (The Lord of the Rings trilogy) digitally remastered a trove of silent black and white footage from the war, bringing it to life with color and sound in the new documentary They Shall Not Grow Old.

The four-year project was commissioned by the Imperial War Museum in partnership with the BBC, which provided Jackson with 600 hours of footage to produce the film. The 90-minute documentary captures the realities of war on the Western Front, from combat, to life in the trenches, and those brief moments of respite during the soldiers' downtime.

“I wanted to reach through the fog of time and pull these men into the modern world, so they can regain their humanity once more–rather than be seen only as Charlie Chaplin-type figures in the vintage archive film,” Jackson, who was drawn to the topic due to his grandfather's service in World War I, said in an interview with the United Kingdom's iNews.

The documentary features commentary from 120 World War I veterans pulled from recordings of BBC interviews conducted in 1964, and moments of dialogue captured on film were recreated using professional lip readers, and narrated by professional actors.

“They Shall Not Grow Old” took four years to create and was pulled together from 600 hours of silent black and white footage.

In the trailer we see and hear artillery firing into the distance, first-generation tanks rumble over trenches, as cavalry races along shallow riverbeds. In the next moment, British soldiers laugh, smoke, and grin at the camera — some with ash and mud still on their faces.

The newly colorized footage, while visually stunning, is only half the allure of the film — the real draw is in the soldiers themselves.

“There's been lots of documentaries made on the First World War … and I just decided for this one to strictly just use the voices of the guys that fought there,” Jackson told iNews.

They Shall Not Grow Old makes its debut at the BFI London Film Festival on Oct. 16, and is scheduled to run on BBC on Nov. 11.

DON'T MISS: 'For Heavens Sake Stop It': How A WWI Army Officer Stopped Friendly Fire From Hitting His Men