In 2006, Gina Elise had an unusual idea. The grandchild of a World War II Army veteran, she’d become interested... 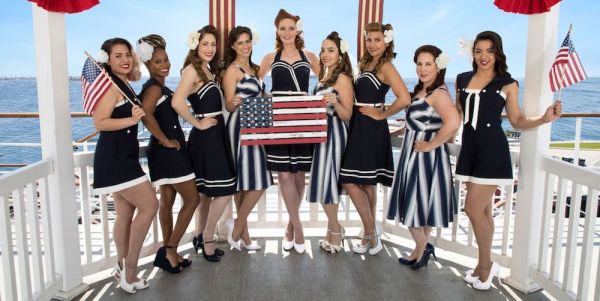 In 2006, Gina Elise had an unusual idea. The grandchild of a World War II Army veteran, she’d become interested in the American tradition of wartime pin-up propaganda that dates back to the start of the World War I. Looking to give back to the veterans community after being moved by coverage of wounded U.S. service members in Afghanistan and Iraq, Elise decided to revive the pin-up calendar to raise money for hospital visits and rehab equipment.

Her first model was, well, herself.

Fast forward to 2018, and Elise’s idea has blossomed into a mature philanthropic organization in the non-profit Pin-Ups for Vets whose WWII-style pin-calendars haul in thousands in donations for wounded service members. Their 2019 calendar, featuring amputee trailblazer Kirstie Ennis and Mrs. America hopeful Patti Gomez-Michalkow, just dropped this month — but Elise is still bowled over by a community of dozens of female veterans and volunteers unlike anything she’d previously imagined.

“If someone told me I’d be doing this for 13 years, I wouldn’t believe them,” Elise told Task & Purpose. “But once you get involved with the veteran and military community, you’re inspired every day by the stories of resiliency and the amazing community.”

The 2019 calendar is a big one for Elise. There are 19 female veterans from all walks of life, every service, and various MOSs — a cross-section of the dozens of volunteers who help Pin-Ups For Vets’ philanthropic projects, which have expanded from hospital visits to fundraising and support. Ennis is the first amputee ever featured in the project; Elise got lucky and reached out to her on Instagram after Ennis’ appearance on the cover of Sports Illustrated’s 2017 Body Issue.

“I’m so honored to have [Ennis] in it. She’s quite a blonde bombshell,” Elise said. “She’s super easy going and just so down to earth, and you feel like you’re best friends with her the minute you meet her.”

It’s that sense of community that’s at the core of Pin-Ups for Vets, whose purpose is not just to raise money, but to help make female veterans facing their own transition struggles.

“When I got out of the military I cut off virtually all contact with the military and veteran community,” Army vet Linsay Rousseau said. “It wasn't until I moved to LA and met an amazing group of veterans that I started getting back involved. Pin-Ups for Vets was not only doing amazing work for veterans, but they were approaching it from a really unique angle, something no one else is doing.”

One particular struggle is unique to women: reclaiming their femininity after years in the gender pressure-cooker of the U.S. armed forces.

“A lot of these women have told me that utilizing the aesthetic of the World War II has really helped them regain their femininity pos-service,” Elise said. “They love dressing up. We’re multifaceted, but to tap into that femininity and to give back …. I like to joke we make volunteering look glamorous, but we’ve received submissions from women that want to do exactly that.”

“It can be so difficult as a female service member to feel empowered in her beauty without feeling like she may betray the professionalism of her uniform when we only seek to be treated like our male counterparts,” Army veteran Julie Noyes said. “I feel that Pin-Ups for Vets does a superb job at raising money and awareness for our elderly, wounded vets and our currently deployed troops while also showcasing the class and beauty of female veterans without objectifying them.”

While the ecosystem of female veterans that developed around Pin-Ups For Vets felt unexpected to Elise, it embodies everything that most Americans value in the military: resilience, community, and a sense of service to society far beyond their number.

“These women come from all parts of the country, from so many different jobs and branches within the military, yet they’ve come together to give back service even after their service,” Elise said. “As one of our Marine vet volunteers likes to say: ‘I come for the service, I stay for the sisterhood.’”