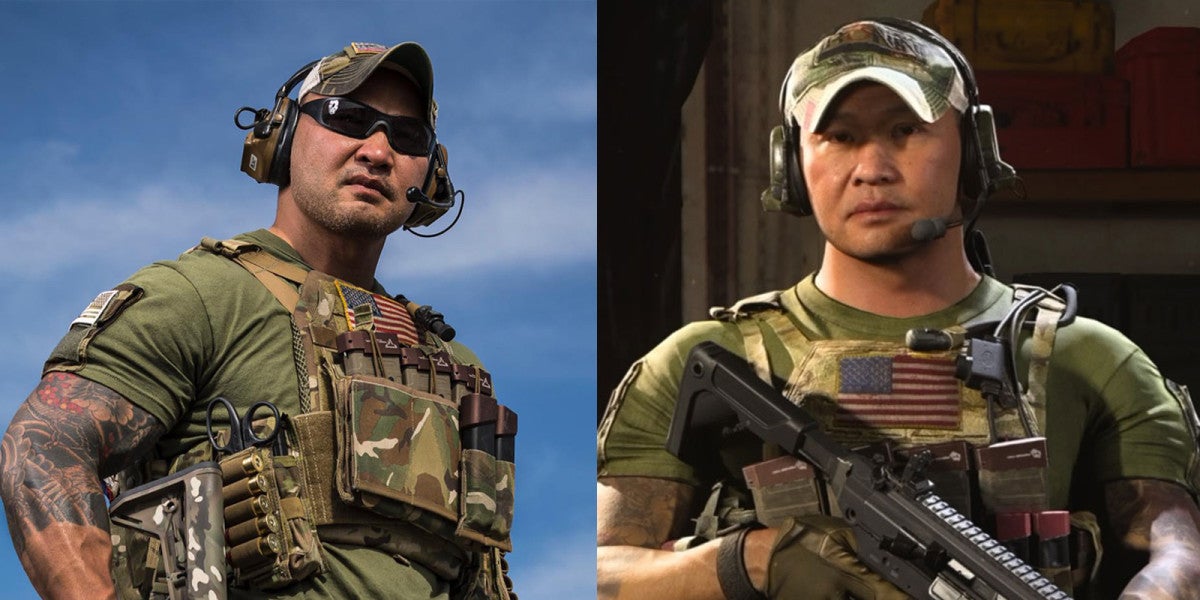 As a child, Lam fled the communist government of Vietnam in 1979, escaping on an overloaded fishing boat before eventually making his way to the states, and later, into the U.S. Army, where he followed in the path of his step father, who served in Special Forces.

Lam spent 18 of his 23 years in the Army in Special Forces, deploying to 27 countries — the majority of them war zones and conflict areas — before retiring in 2016 as a master sergeant. He went on to found Ronin Tactics, which develops equipment and provides training for civilians and law enforcement personnel.

And on Tuesday, Call of Duty: Modern Warfare introduced Ronin, a new playable character in the first-person shooter who is literally modeled after Lam — even taking the name of his company, and sporting the business’ logo as his shoulder patch.

While most of the characters in the Call of Duty franchise are amalgamations of service members, often created with input from veterans and military advisers, Ronin is the first character in Modern Warfare to be modeled directly off a real-life veteran.

“In Modern Warfare, we always draw this line where we want it to be real, but with gamers and gaming stuff you’re pushing to have it be over the top, so you’re trying to find this balance,” Dave Stohl, co-studio head at Infinity Ward, told Task & Purpose.

But of Lam, Stohl said that “he’s a larger than life character.”

“A lot of stuff is exaggerated in a way for gaming, but that’s what is so exciting when we meet guys like Tu, because for me, why I got so excited, is because it’s real — he’s real,” Stohl added. “His philosophy, the tattoos, the whole bit. I think he’s the first real guy that we’ve used in the game like this.”

However, Lam concedes that not all of his SOF training transfers over to the game.

Given the franchise’s popularity within the military, when Infinity Ward reached out to Lam to see if he’d be interested in working on the project, it was an easy sell.

“You can’t walk into the post exchange without seeing Call of Duty posters,” Lam told Task & Purpose. “It’s just really part of the culture in the military. In Special Forces, we’d go out to do missions, and then guys would come back to log on to play. It’s a morale thing for our veterans overseas.”

To create the character, Lam was flown out to Infinity Ward’s studio in Los Angeles, where they conducted a series of motion captures — rigging his body with sensors and surrounding him with cameras — as he executed certain moves, like Ronin’s in-game finisher:

“When we do these motion captures, a lot of times we go grand with the movie side of it,” Mark Grigsby, the animation director at Infinity Ward told Task & Purpose. “But this time around we really wanted to bring it back to be a little more realistic and grounded, but still fantastic.”

And that’s where real-life operators like Lam come in.

“There’s a certain way you can tell that person has that weapon in his hand, and that he’s had that in his hand in multiple situations and it is very natural to him,” Grigsby said of Lam.

As a franchise, Call of Duty has a long history of turning to the military community, not just for inspiration on the single player campaigns, but to ensure authenticity and accuracy in the game’s mechanics.

“We’re always looking for what’s cool, first, and then how authentic we can get it,” Grigsby said.

Consider that moment when you aim down the sights in the game.

“The snap of a weapon when a soldier pulls it up, you can tell it’s because of his repetition and practice, and you also have a little bit of flare to it, so there’s a mixture of both worlds,” Grigsby said.

And Lam says that balancing act between realism and style has paid off.

“How the writers and their team put Modern Warfare together, they’re pretty much right on with how Special Operations work with the [CIA] and with rebel forces,” he said of the game’s single-player campaign.

“I think it pays homage to our military, and it also helps with recruitment, with the next generation of Americans,” he added. “It builds patriotism, it gives them more information about the military and it gives them an interest in the military. I think it’s needed.”