Screw Your Friends Over In ‘Blue Falcon,’ A New Card Game For Vets

The phrase blue falcon is traditionally used in the military as a stand-in for “buddy fucker” — like, say, the … Continued 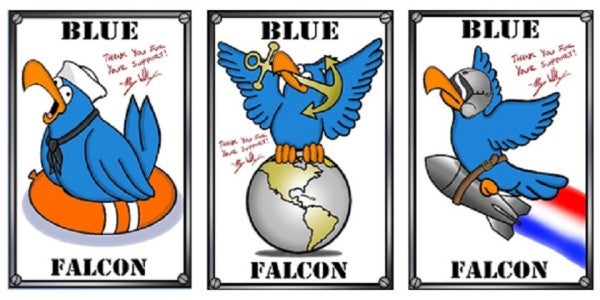 The phrase blue falcon is traditionally used in the military as a stand-in for “buddy fucker” — like, say, the underage private who gets a DUI on the way back from the strip club, then dimes out his comrades for buying him beers. There’s (at least) one in every unit, and he will always find you, and screw you over. Living with blue falcons is a well-worn part of military life.

Fortunately, those of us who never gave our squadmates the big bone can now liberate our inner snitches. A group of prior-military satirists, artists, and writers has created a card game called Blue Falcon and is seeking seed money on Kickstarter.

The way it works is pretty straight forward, as card-based elimination games go: “You take on the age-old military tradition of screwing over your buddies,” the game makers say. “Players will try and acquire ‘blue falcon’ cards and play them to eliminate their opponents. Last player standing wins.” The other cards in the deck dictate the offensive and defensive actions you can take (“AFN and chill” anyone?), as well as giving you a shot to block blue falcon cards or determine how many cards other players can draw.

Designed by the crew over at Wargames LLC, the Kickstarter campaign launched May 7 and has reached $7,160 of its $9,000 goal, with a product slated to be out by October 2017. Last year, the company crowdfunded FUBAR, another military-based card game similar to Cards Against Humanity that pays homage to the longstanding military tradition of complaining that your gear, comrades, and life are “fucked up beyond all recognition.”

Related: This Hilarious New Card Game By Veterans Is FUBAR »

“Our intent is to market the game to the military as well as the broader civilian market, through demos, contests, and word-of-mouth via social media and professional industry forums,” the makers write on their Kickstarter page.

The deck is full of recognizable characters and situations (you may have met Dependa at your first duty station), but perhaps it also contains a chance for deeper self knowledge. As Blue Falcon’s designers put it: “If you're in a crowd of people and can't figure out who the blue falcon is, there's a pretty good chance it's you!”