‘Super Troopers 2’ Was Worth The Wait

Back in high school, I was a tennis-playing theater kid who was scared of a dodgeball. Then I saw Super... 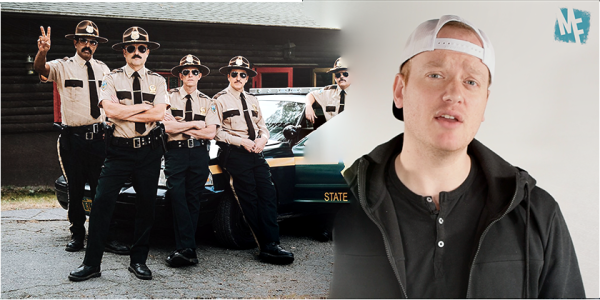 Back in high school, I was a tennis-playing theater kid who was scared of a dodgeball. Then I saw Super Troopers and my life was changed. I developed a love for cheap beer, babes, and mustaches. I’m also pretty sure it’s also what motivated me to become a Marine.

Seventeen years have passed since then, and the idea of a sequel seemed like nothing more than a rumor for the longest time. But after one intense IndieGoGo campaign by the Broken Lizard crew and three years of hoping and praying, Super Troopers 2 is finally here — and as the reviews come in it’s important to note that mine is the only one that matters.

I was a little worried that the movie would suck since so many comedic sequels leave me feeling like I just drank a skunk beer; I walked out of Anchorman 2 wondering if I would ever be the same. Those fears subsided about one minute into the movie.

The plot (without giving away any spoilers) is simple: the former officers of the Spurbury Police Department, in need of new work after an incident involving Fred Savage, and are called up to assist the U.S. in the smooth takeover of a Canadian town due to a newly-discovered border problem. This allows not just for some beautiful verbal jabs between Americans and Canadians alike, but for the notorious Officer Farva to transform into the human avatar of every angry veteran you’ve ever seen online (if you’ve seen it, please let me know what you think of his rendition of the National Anthem).

Part of the appeal of the sequel is that, well, it doesn’t really feel like a sequel. The original script for Super Troopers had the goal of a joke every six seconds. Super Troopers 2 maintains that goal without having to rely on callbacks from the first film, allowing for a true standalone comedy despite its sequel status.

All in all, Super Trooper2 hit the mark for me. This movie was funded by fans, and it was clear that Broken Lizard made sure it was made for those fans who’ve supported them for years — and the boys delivered. If you’re not laughing in the first few minutes, then I think you don’t belong in my beautiful U.S. of A.