‘Battlefield V’ is finally sending us to war in the Pacific

​Battlefield V​ is shipping out to the Pacific theater of World War II, and it's about time! 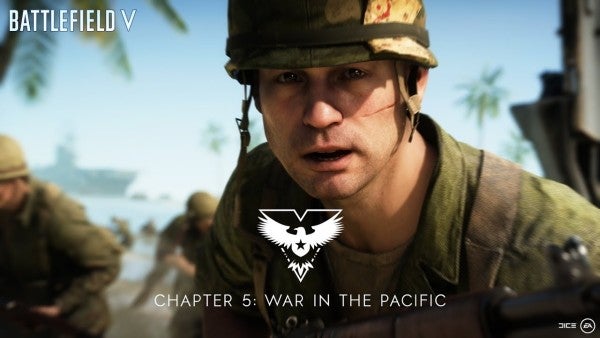 Battlefield V is shipping out to the Pacific theater of World War II, and it's about time!

Enter the fray in #Battlefield V’s War in the Pacific.

The teaser, which was posted to the game's official Twitter account on Monday, gives just a brief glimpse of what we might see when the latest add-on finally debuts this Fall. A full reveal of what's in store will be released on Oct. 23.

In the brief clip we see a U.S. service member looking out toward a string of islands from aboard a ship as someone shouts “it's time to move out soldiers.” And while it was a bit of a personal let down that the character isn't a Marine — I'm biased, sue me — I can't deny that I'm incredibly stoked for one reason: We may finally get to use the M1 Garand.

Imagine loading up Battlefield V, jumping into a Pacific map and hearing: pic.twitter.com/2qYsHzkaVw

Given that Battlefield V is set to run the course of World War II, with individual free-to-play expansions moving the timeline forward, it makes sense that players haven't yet had a chance to use the iconic rifle: At this point in the game's existing timeline, the U.S. military has yet to enter the war — even though the M1 Carbine and Thomson submachine gun, both of which were hallmark weapons of the U.S. military during World War II, have already made it into the game.

With the Pacific theater opening up to players, we'll get to play as two new factions, the U.S. and Japan, as well as see some new maps (Iwo Jima is already slated to be one of them). The new expansion also includes seven new weapons and gadgets, and some additional vehicles.

But Heaven help DICE if they don't finally add the Garand.